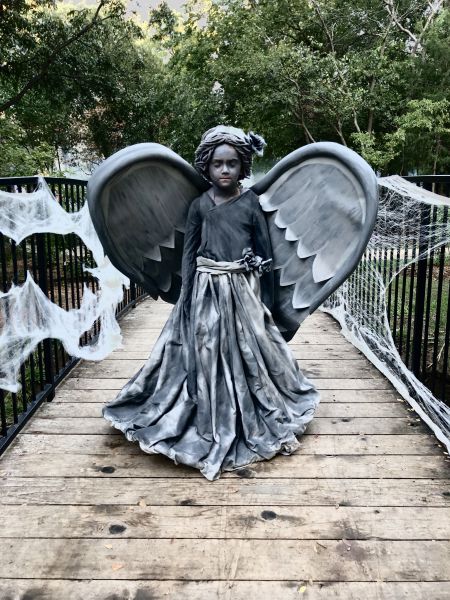 This idea came to me when I decided to dress my daughter as an Angel. I knew it needed to be something different, so I threw this together.
The wings are made up of foam board, poster board and foam pipe all zip tied to backpack straps.
The skirt is material purchased from Walmart that is seen together and fed through a metal wire are the base.
Lastly, I individually got glued pieces of yarn together and stuck them on a secured hat! 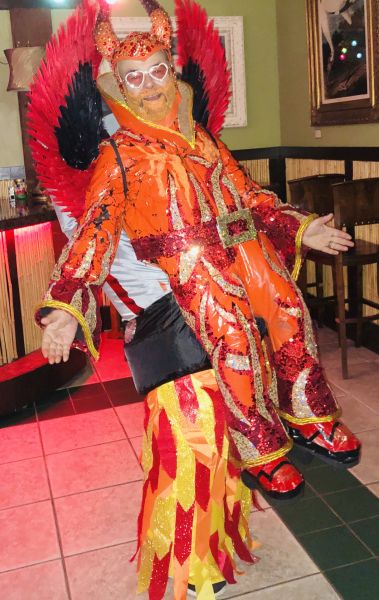 I loved the movie Rocket Man The Costumes were amazing and I thought I would recreate one of the most spectacular… with a twist! As ll of the keels and sequins are hand applied the cuffs, bell bottoms and shoes are made from foam and then covered with sequins fabrics the headdress is also hand made the rocket fire is covered in Christmas ribbon to make it glitter! Elton is taking off!!! 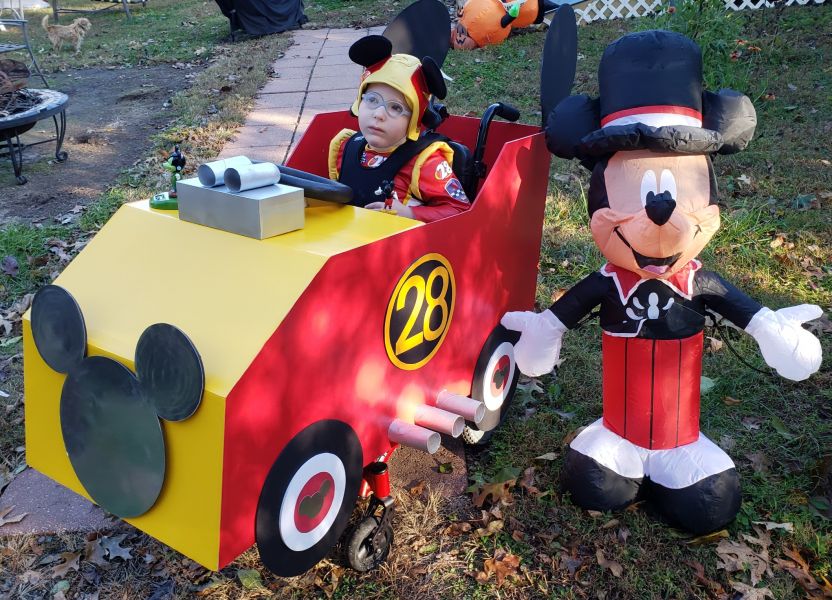 This is my first attempt at making a wheelchair costume for my son, and we’re quite proud of it! He’s a huge Mickey Mouse fan, and I wanted to make something really special for him this year. I looked at what others have done for their loved ones with mobility issues, and I used one of his toys for inspiration. Basically, I built this around his wheelchair, using his tray for the main supoort. I assembled it out of foam board, lots of glue, and tons of masking tape. I had fun making this, and I’m already looking forward to what I’m making next year! Happy Halloween! 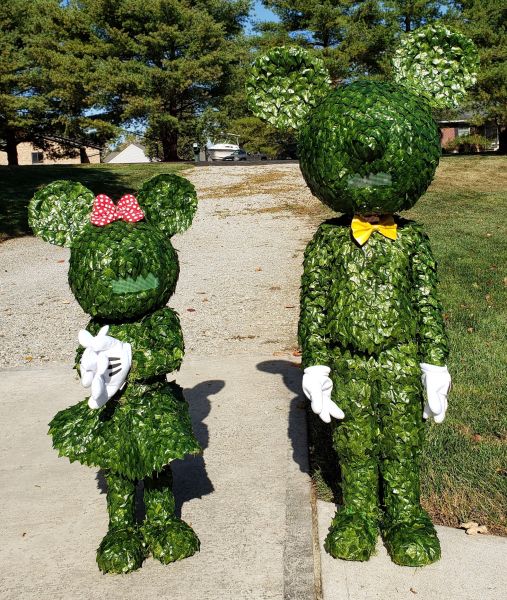 This is Kai (6yrs) and Lorelei (3yrs) as a Mickey & Minnie Topiary!

We went to Disney World just before Halloween and decided to make these costumes for Halloween.

We used a bounce ball to paper mache the heads, using paper plates for the ears.
We used a bike helmet in the heads for locked on support.
We glued on Spanish Moss and Ivy Leaves from Ivy Vines to the head and clothes.
We used old shoes, stuffing and duck tape to make the oversized shoes.
We finished the look off with a Yellow Bowtie, Minnie Bow and Cartoon Hands.

Everyone loved the costumes, they were a big hit!

2. Jack and Sally (Nightmare Before Christmas) 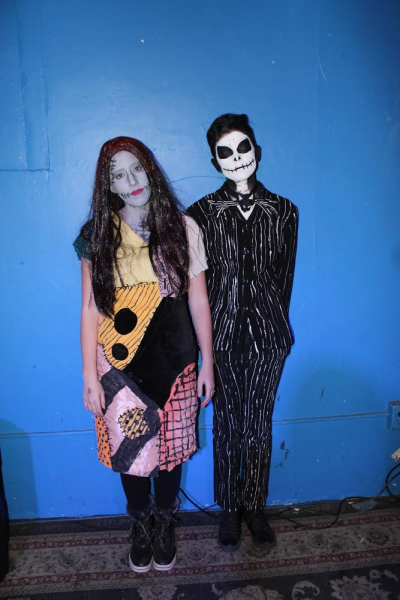 Nightmare Before Christmas has always been one of our favorite movies, so there was no question in going as Jack and Sally this year for Halloween! We like to be super creative, so we went to Goodwill and purchased some basic gear to lay as the foundation. We then bought some random shirts/pants that had the texture and colors we wanted, and we cut them and hand-sewn them on the dress.

Some of the pieces were also glued on, with fabric paint and marker also used to add dimension and give the dress more character. From there, we bought a cheap wig from Walmart and spray painted it - altogether, our costumes and were less than $30! So much more original this way, and sooo many people have complimented our costumes and makeup. Nobody has had trouble guessing who we are for Halloween, that’s for sure! 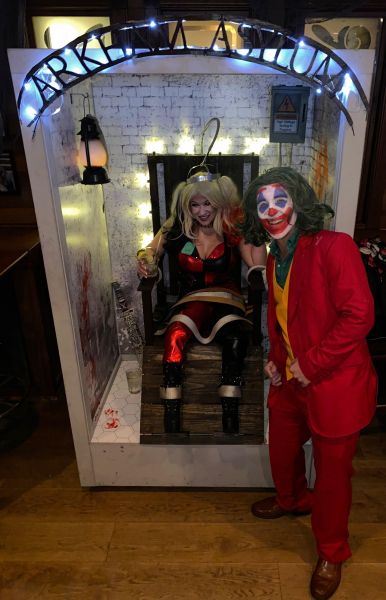 We made the entire project from scratch. We used luan plywood for the walls and wood pallets to make the electric chair. We left a hole in the seat of the chair so that Jenna could stand up through the bottom. We created fake legs out of random materials and stuffed those materials into the pants of a Harley Quinn costume. We then placed the legs on the chair and strapped then in and put a strap across the waist creating the illusion that the legs were real.

We added lights to the outside of the chair to give some more ambiance to the scene and added a lantern that flickers so that it gives the look of an old building. We also added some spray painted images and bloody handprints on the inside walls. We really wanted to focus on every little detail. The Arkham sign is made of cardboard that was sprayed a metallic black to look like metal and was supported by metal wire. String lights were wrapped though the sign to give off more light on the scene and the sign so people could see it all clearly.

This project took about two weeks to make. 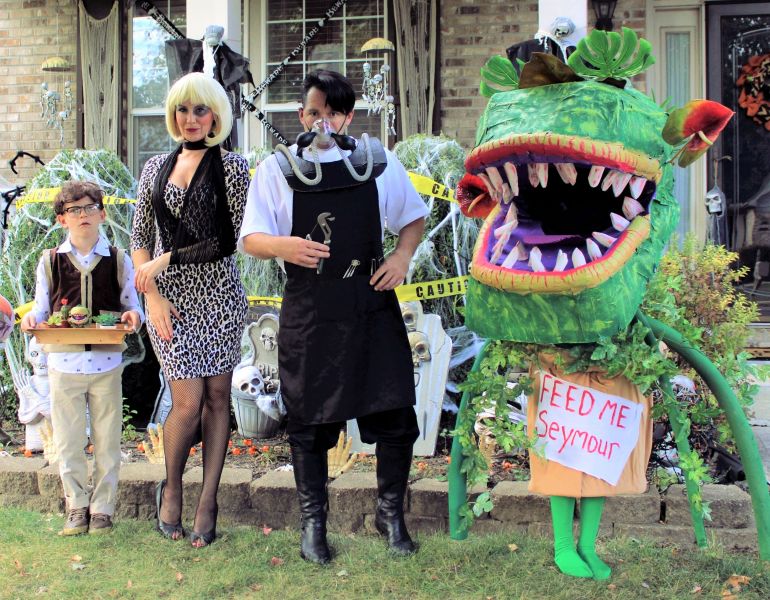 My family and I went as Little Shop of Horrors this year. Each year we pick a movie or show from the late 80s/early 90s and I’ve been wanting to do this one for a while now. Seymour’s sweater vest is actually two different sweaters I found at a thrift store and cut and made into one to look just like the one from the movie. We even taped his fingers with fake blood like the movie as well. We made the dentist oxygen tank out of cardboard, 1 liters we spray painted and a few random parts around the house we spray painted and zip tied to the cardboard. Audrey 2 mask is made out of wire hangers, poster board, a pool noddle and paper mache. The covering for the open mouth is a dark purple sheer shirt cut from a thrift shop so she can see out, but no one can see in. The teeth were made from foam tubing we had at the house, cut in half and painted. The pot is a mesh laundry hamper with a pool noodle at the top, wrapped in a sheet I found at a thrift store all for less than $3 to make. The leaves and vines are also from thrift shops. All other clothes are from thrift shops. We had so much fun with these costumes this year! 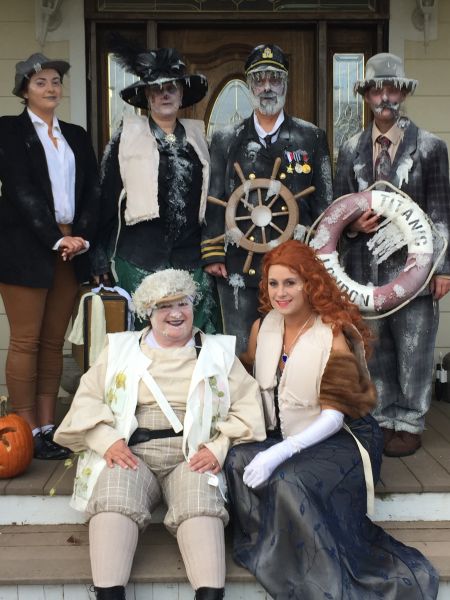 Titanic themed: Most of our clothes were either purchased at our local thrift store or clothes our group had stored in the back of their closets. We gathered our vintage clothes and pieced outfits together. We then sprayed our clothes with fake snow to get the frosted look. Our icicles are clear plastic beads we melted down in the oven. Our makeup consists of a white base with kosher salt (applied with liquid latex) to look like snow. These costumes were easy and fun to make. Our costumes were a huge hit and we received countless compliments. 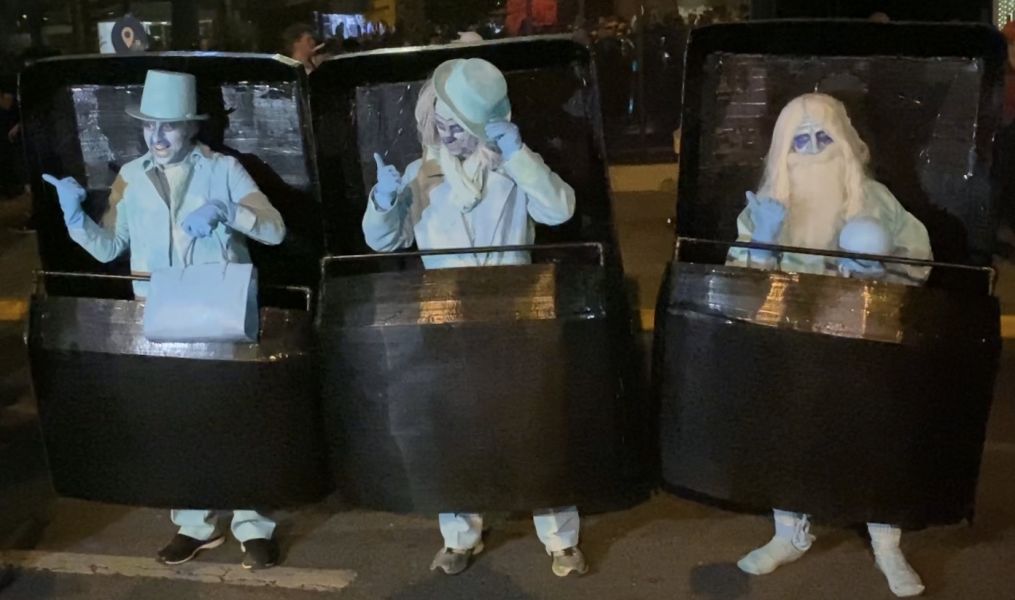 Every year my buddy Andy and I like to do an elaborate costume that includes some sort of vehicle or structure. This year, in honor of the 50th Anniversary of the Haunted Mansion, we decided to do the hitchhiking ghosts at the end of the ride. Many people have done the ghosts before but no one has done the ghosts in the “Doom Buggy”. At the end of the ride you are warned about hitchhiking ghosts and you come across a bunch of mirror and when you look in the mirror it looks like a ghost is there with you in the middle of your buggy. The idea was to make it so people can get into the buggy with us on either side to take pictures.

The buggies were basically made with cardboard and duct tape. We bought 3 king/queen mattress boxes and cut out one side leaving a flap at the top. We then curved the box a little and taped the flap over the top to hold the curvature and create the rounded top. We then added a long 3 inch wide strip of card board to each side. They duct taped the whole box. Using the other side of each mattress box we did a similar this, though half the size to created the front of the buggy. We used pvc pipe to create the safety bars and duct taped the whole front. We used a mesh material to make the three speakers that sit inside at the top of the buggy.

Now the structural engineering of how we wore them was a little tricky. Using dollar store backpacks we cut slits in the back of each buggy based on our individual height (we are all different heights and we wanted the buggies to look the same height) and we ran the top and bottom parts of the backpack straps through the back of the buggy and the refastened them on the inside of the buggy. This way we are basically wearing the buggy as a backpack. Then taped dollar store shelving brackets to the inside of the buggy near our waist and taped pvc pipe to that so the pipe was perpendicular to the buggy. This is what we would connect to the front panel of the buggy. On the inside of the front panel we also taped 2 shelving brackets. Initially the plan was to tape pvc connectors to the front panel and just pop them on to the pipes that were sticking out from the back of the buggy and thus complete the buggy but this proved to be difficult to take on and off if we wanted to “open the door” of the buggy to let people in. So instead we put a bar across the two brackets on the inside of the door and then rested that bar across the two pipes that were sticking out from the back. To make sure it didn’t slide off we added elbow shaped connectors to the two pipes from the back facing upwards. This all worked well however the weight of the door resting on those pipes started to tile the whole buggy forward. We then had to run a thin rope through the back of the buggy and tie it around our waste to keep the back of the buggy upright. This all worked perfectly and the buggy hung from us hands free and if we wanted to take the door off to let people pose inside and hold the door it was easy.

The costumes themselves we bought at thrift stores and Goodwill. We bought white jackets, pants, shirts, hats, a bag, and a ball and chain. Then using fabric paint sprayed them mint colored to give that ghost look. We ordered the beard and wigs online as well. Finally for the makeup we just used two different colored blues and a white to give us the ghost look and used blue dish gloves for our hands. We didn’t want it to be obvious how we had the buggies attached to us so we cut slits in the back of the costumes to run the backpack straps through them and the rope so nobody could see them.