How to Make Sakura Haruno Costume from Naruto Sakura Haruno is known as the ninja with the pink hair. Her outfit complements her pink hair as seen with her red top, pink shorts, and dark sandals. She also wears a red forehead protector with the mark of Konoha.

Sakura Haruno is a character from the anime and manga franchise of Naruto. She is a part of Naruto’s Team 7 together with Sasuke. She is introduced as a girl who has a crush on Sasuke. Later on, she was mentored by Lady Tsunade and she became a medic ninja and became one of the strongest Kunoichi in the land. 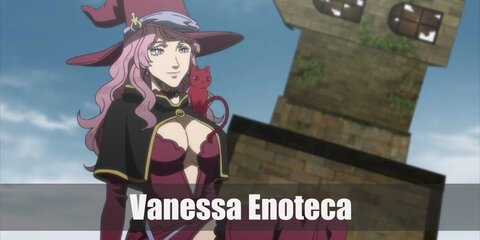 Vanessa wears a sexy lingerie-style bodysuit, stockings, and gloves in a burgundy shade. She also has a cape, pink hair, and a hat.