How to Make Yuri’s Costume from Doki Doki Literature Club! Yuri’s costume is almost the same as the other Doki Doki Literature Club members. They all wear a brown blazer with blue skirt, long socks, and shoes. Yuri’s is different only in the color of her hair which is purple. You and your friends can rock this costume by simply wearing the same outfit but with different wigs!

Yuri is a character from freeware visual novel Doki Doki Literature Club!. The main player is invited by its childhood friend Sayori to join their school’s literature club. The character reluctantly accepts the invite and meets the other members of the club, one of them is Yuri. She reveals that she often struggles talking with others which leads her to feel isolated. Himiko Toga's costume features a school-girl inspired look with an oversized sweater and pleated skirt. She also sports twin buns as well as a knife. Eri's costume features a white inner blouse under a red jumper dress. She also has khaki boots and a red sling bag. Complete her costume with a clip horn on the forehead and grey wig. 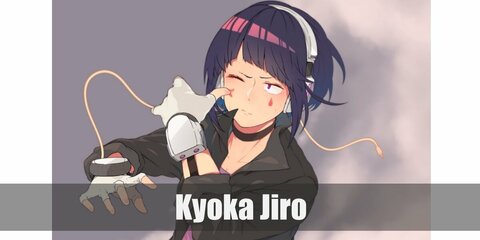 Kyoka Jiro’s outfit features a cropped jacket on top of a peach top and dark pants. She also has a head phone to complete her signature look.