Doc Brown (Back to the Future) Costume for Cosplay & Halloween

Doc Brown is your typical absent-minded mad scientist, always tinkering with this and that. He also dresses like your typical mad scientist, crazy white hair and lab coat included. He makes the perfect costume for anyone wanting to really surprise and amaze their friends and others with an outstanding outfit. Putting this costume together does require some effort, but it is most definitely worth it in the end. Here’s what you will need. Doc Brown is an amazing choice of cosplay costume. Back to the Future is a 90s hit movie that is still recognized today for its novelty and ingenuity. Anyone who chooses to create a Doc Brown costume is assured to have one of the coolest costumes at any event.

About Dr. Emmett Brown from Back to the Future

Doctor Emmet Brown is the mad scientist without whom the Back to the Future movie series would practically be non-existent. He is the genius who creates a time machine from an old DeLorean car which sends Marty Mcfly into time and creates the beginning to the continuing movies.

Throughout the movie series, Doc and Marty get into much time-related mischief, and Doc is always saving Marty from being stuck or stranded in time. He can probably be described as the typical mad scientist character, but nonetheless, he is a beloved character of both the 90s and today’s pop culture fans. Marty Mcfly (Back to the Future) Costume

Professor Poopypants has on an unexciting tweed three-piece suit, a yellow dress shirt, a brown bow tie, and brown Oxfords. He also has crazy white hair. Steve is seen wearing his iconic bright red beanie and an all-blue ensemble. Here is everything you need to look like Steve Zissou 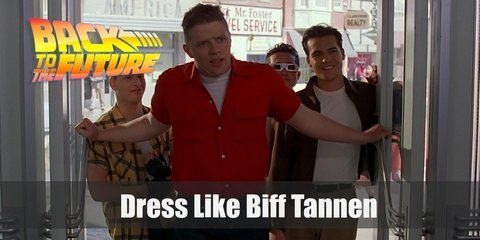 Biff Tannen (Back to the Future) Costume

One of his most recognizable Biff Tannen outfits is his look during the 60s. Here’s what you will need to recreate this Biff Tannen look for yourself
Some of the links may be affiliated. When you buy through our links, we may earn small commision. Read Full Disclosure. Thanks for supporting us.