Ra’s al Ghul is infamous for his role as the leader of the League of Assasins. He is a well-known adversary of Batman and is dangerous because of his numerous skills.

Aside from being a highly-skilled martial artist and swordsman, Ra’s al Ghul also has a genius level of intellect which he uses primarily for criminal purposes. He is also the father of Talia Al Ghul.

He is also famous for his alchemic skills, and his interesting choice of outfit. There have been many variations to Ra’s al Ghul’s outfit, but a popular one is the one where he wears a white dress shirt and a collared cape. Here’s everything you need to look like Ra’s al Ghul. Ra’s al Ghul first appeared in Batman #232 which was published in 1971. He was created by the collaboration of Dennis O’Neil, Neal Adams, and Julius Schwartz.

Check out these sites to read more about Ra’s Al Ghul and the other characters from Batman: The Dark Knight Rises: 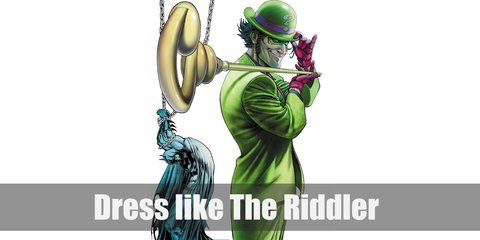 The Riddler costume is wearing a green business suit with question marks all over, a green bowler hat, purple gloves, and his golden question mark scepter.
Some of the links may be affiliated. When you buy through our links, we may earn small commision. Read Full Disclosure. Thanks for supporting us.