Dennis Mitchell is a clever and lovable 5 and a half-year-old boy full of wide-eyed curiosity and energy. Like any other young boy, he is also rambunctious which is why he always finds himself in the middle of mischief, much to his parents’ (and Mr. Wilson’s) dismay.

Better known as ‘Dennis the Menace,’ this cute little boy can be seen wearing a blue-striped shirt beneath his bright red overalls, a pair of white sneakers, and his trusty slingshot. Here’s everything you need to look like Dennis the Menace. About Dennis the Menace

Our favorite mischievous five-year-old first wreaked havoc sixty-seven years ago when the comics was published in the newspaper on March 12, 1951. It may not seem that long but Dennis and his shenanigans have been ensnaring the hearts of his audience for more than half a century!

Coincidentally, on that fateful month in 1951, another comic strip was also published across the waters in the United Kingdom. It was also named Dennis the Menace! However, both comics do not have any relationship with each other, and the UK comic changed its name to Dennis and Gnasher. 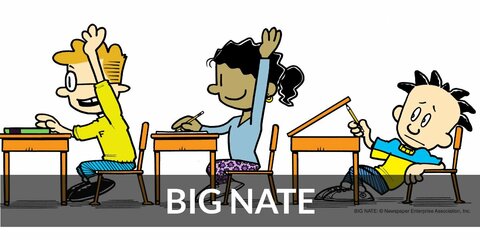 Big Nate’s costume is a blue and yellow shirt, denim pants, white sneakers, and a spiky wig. He may not be the best student, but Big Nate does make class more entertaining.

Shouto Todorki’s costume is either a blue long-sleeved coverall or a blue collared, long-sleeved top, blue pants, a khaki tool belt, white knee-high boots, brown arm bands, and a white wig.
Some of the links may be affiliated. When you buy through our links, we may earn small commision. Read Full Disclosure. Thanks for supporting us.