Raven Queen (Ever After High) Costume for Cosplay & Halloween

How to Make Raven Queen’s Costume

Like other girls in the series, Raven Queen has her color scheme and it’s purple. She wears a purple corset, a purple skirt, a queen styled white collar, a spike tiara, bracelets, net stockings, and high heels. She also has purple hair which we will imitate, and carries a book as a prop. If you wish to recreate this look, please checkout our item list down below! Raven Queen is a one of the characters in Ever After High, a Netflix series evolved from the franchise doll with the same name similar to Monster High. In the series, all the characters are based on those that we know from many fairy tales and classic stories such as Snow White, Aurora, and Goldilocks for example.

Raven Queen is deemed to be the next Evil Queen from Snow White and the Seven Dwarfs. Obviously, she sides with the rebel group in the school conflict. More than that, she’s even named one of the founders since her rejection to the destiny inspires many people. Apple White (Ever After High) Costume 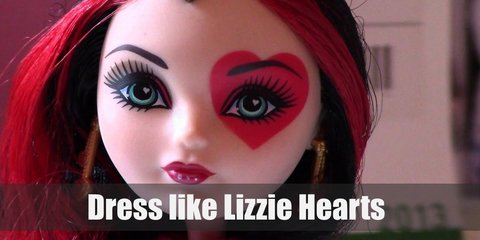 Kitty Chesire costume is a purple dress with black lace, purple-striped leggings, black ankle boots, and cool black lace gloves. She also has light purple hair with a black headband.
Some of the links may be affiliated. When you buy through our links, we may earn small commision. Read Full Disclosure. Thanks for supporting us.