How to Make a Marie Antoinette Costume As a French Queen, you might think that Marie Antoinette would have a very extravagant and expensive sense of style, but she took it to new heights. She dressed in frills and flounces, and used plenty of feathers too.

Her gowns were huge with so many underskirts and hoop-skirts, and then they had even more fabric added to make them even more voluminous. She wore lots of lacy and stone encrusted jewelry that cost the kingdom a fortune.

Even her shoes were glamorous and had bows on them. Marie’s hair was also a very large part of her look. She always had it done in a stylish and very extravagant way.

Marie Antoinette was very pale on purpose, and had bright blush painted on her face. Her innocent and young makeup look is one you can easily achieve by following this tutorial.

Marie Antoinette was the Queen of France during the late 1700s. She is famous for her extravagant style and her excessive lifestyle.

She was Queen for several years until the French Revolution, but ultimately was executed at the guillotine.

One of her most famous lines is,”Let them eat cake”, which she said when she was told that the people in her country were starving while she lived an excessive lifestyle Renaissance queen costume is a opulent Renaissance gown, ornate jewelry, and of course, a crown. 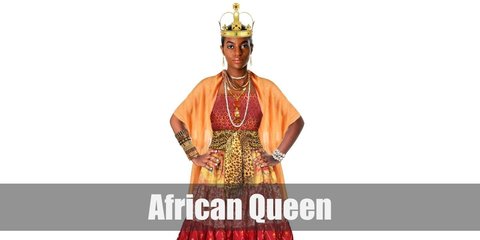 The African Costume consists of a layered colorful dress, multiple bracelets and necklaces. She also sports a shawl and a crown. As such, you probably know these characters: King Kandy, Queen Frostine, Princess Lolly, and Mr. Mint! It’s easy to look like them and all you need to do is buy a few stuff and DIY.

Joan of Arc costume is military armour and garb, sported a short haircut, and carried a flag to her battles.
Some of the links may be affiliated. When you buy through our links, we may earn small commision. Read Full Disclosure. Thanks for supporting us.