Troy & Abed in the Morning! Costume (Community) for Cosplay & Halloween 2022 Beside the iconic singing at the open and the end, Troy’s and Abed’s outfit is also the signature of their show, or even of the sitcom itself. Troy often rocks a classy and simple grey suit while Abed never to fail to look good in his stripe cardigan sweater, and they always hold a cup with the show’s logo printed on it.

In a famous American T.V. sitcom “Community” the characters Troy and Abed, played by Donald Glover and Danny Pudi, who are best friends and the duo of the show, host a talk show called “Troy and Abed in the Morning!” The show is regularly hosted in Group Study Room F where all the main characters often get together, it neither being broadcasted nor taped in the sitcom, but it is sometimes watched and even joined by other characters in the room.

Being done in the manner of a morning show, “Troy and Abed in the Morning!” works as running gags, a comical situation that appears repeatedly throughout the show (like the interview scene in ‘Modern Family’). Typically, the show starts and ends with Troy and Abed sing its name. As the nature of the sitcom, “Troy and Abed in the Morning!” is a light-hearted show poking and spilling jokes about situations and what’s going in the sitcom. 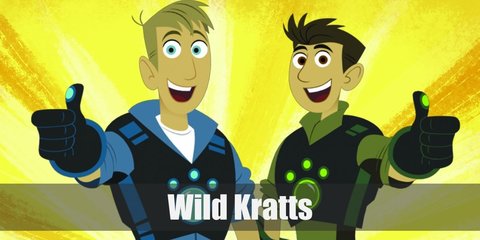 Wild Kratts Brothers costume is easy to make! So if you want to save animals just like them, all you will need is a white shirt, either a blue or green jacket, and khaki pants.