If you’ve ever wondered what a superhero would be like if he’s bored and indifferent, look no further than the protagonist of the hit Japanese anime One Punch Man.

Saitama’s so strong that he can usually finish off his enemies with a single punch. We could see how that could turn boring really fast. But interestingly, he’s not that well-known of a superhero. Saitama is considered one of the strongest heroes in the series yet he still opts for bright and sunny colors for his costume.

Saitama’s outfit is relatively simple. He wears a yellow jumpsuit, red boots, red gloves, and a white cape. But what makes him stand out among his superhero colleagues is his shiny, bald head. Here’s everything you need to look like Saitama from One Punch Man.

How to Make One Punch Man Costume 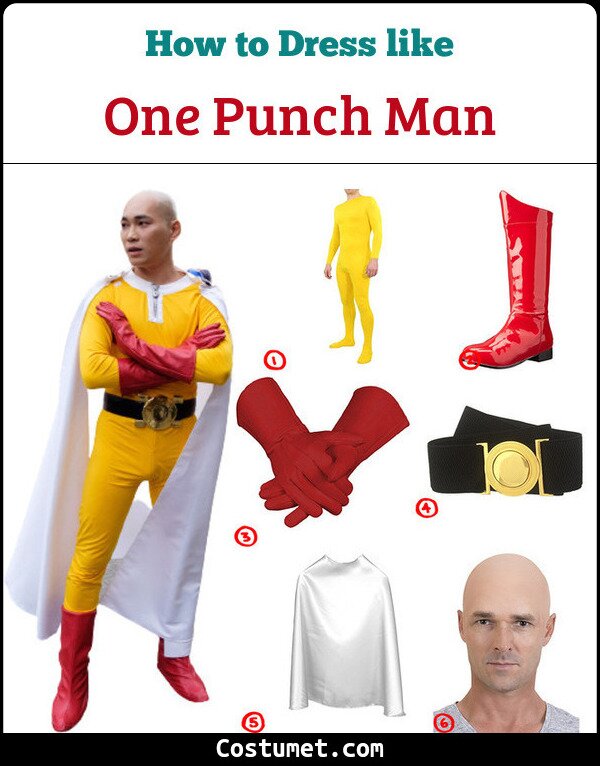 About One Punch Man

Saitama is the protagonist in the manga and anime “One Punch Man”. Saitama lives up to the series title as he can beat opponents with a single punch. Because of this ability, he grew bored in his ways as a “B” class hero. He is notoriously described as an easily-bored man who became a hero just because he thought it was fun.

At some point, Saitama joins the Hero Association. In here, he was assigned to the lowest rankings because he failed the written exam. However, Saitama has showcased his prowess when it came to physical ability. He earned his nickname Caped Baldy thanks to his white cape and iconic bald head.

Saitama was voiced by Makoto Furukawa in the Japanese version and Max Mittelman in the English version of One Punch Man.

Check out these sites to read more about One Punch Man:

Goku costume is an orange traditional Gi over a navy blue short sleeved top. He styles his Gi with a navy blue belt, wrist bands, and ankle boots.
Some of the links may be affiliated. When you buy through our links, we may earn small commision. Read Full Disclosure. Thanks for supporting us.