Davy Jones (Pirates of the Caribbean) Costume for Cosplay & Halloween 2022

How to Make Davy Jones’ Costume from Pirates of the Caribbean

Steal the costume party scene with this Davy Jones look! Below is a quick way to cop his outfit: Centuries in the sea did Davy Jones a number on his looks. His pirate shirt, coat, gothic pants, thick belt, hat, and boots all have an old-world twist as seen its worn state and under-see growth. Replicate these sea elements with glue-on shells and a little powder to dust the ensemble. For Davy’s monstrous features, opt for an alternative octopus-inspired mask and lobster claws.

Davy Jones is a character at the film franchise “Pirates of the Caribbean”. As the immortal captain of the Flying Dutchman, he was originally tasked by sea goddess Calypso to ferry dead souls to the next world on his ship. He fell in love with Calypso which led him to eventual heartbreak and betrayal. This made him take his heart out and store it in the infamous Dead Man’s Chest.

Davy Jones was also responsible for turning the Pirate Brethren agaist Calypso and in turn wreaking havoc to the oceans. As he grew angry and violent, his appearance also changed resulting to a mix of sea creatures combining on his person. 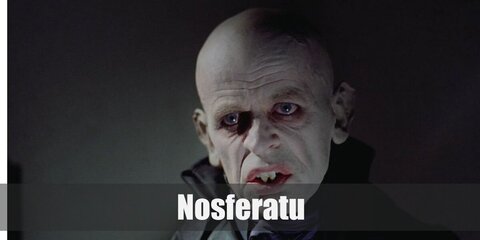 The Nosferatu costume features a dark long coat with pants, a scary mask, and monster hands for gloves.