The Crow Costume for Cosplay & Halloween 2021

How to make The Crow Costume 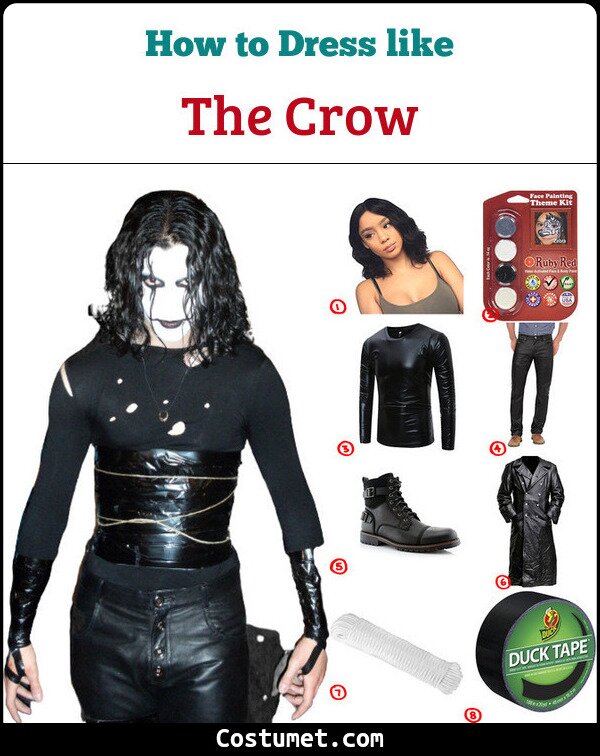 Due to his profession as a rock musician, Eric came back as the Crow in a black leather outfit. He wears a long sleeved leather shirt, leather pants, and a leather long coat. Also, the Crow has an iconic face paint of pale face with black eyes and lips. Create your own the Crow’s vengeful look by following our list below.

In 1994 The Crow, a dark fantasy action American film directed by Alex Proyas, was launched to the word of cinema and its audience. The film is based on a 1989 comic book written by James O’Barr. The Crow tells the story about a rock musician Eric Draven, portrayed by Brandon Lee, who came back from dead to avenge his killer, who shot and threw him out of the window and also raped and beaten his girlfriend. Out seeking for revenge, Eric is helped by the girl named Sara and Police Sergeant Albrecht. At time, the movie was widely talked about because of the tragic death of the lead actor Brandon Lee, in result of having wounded in the accident during the shoot. King Kong’s costume is a grey sweater, grey pants, and a building headpiece while your kid wears a monkey suit. A typical Sweeney Todd costume of his would be a button-up shirt, trousers, a coat, a necktie, and professional dress shoes.
Some of the links may be affiliated. When you buy through our links, we may earn small commision. Read Full Disclosure. Thanks for supporting us.