Kids of the ‘60s and ‘70s will remember this weirdly cute and interesting little toys. The first Troll doll was created for the inventor’s daughter as he could not afford a Christmas gift for her.

By the early 1960s, it has become popular in Europe and also became famous in the United States.

The look of a Troll doll is simple. They don’t have clothes and they have unconventionally bright colored hair that are known to stand straight up.

But people might not like you not wearing anything so you can probably wear a nude leotard, nude leggings, and a bright wig. Here’s everything you need to look like a Troll doll.

How to Make a Troll Doll Costume The Troll Dolls were created by Danish woodcutter, Thomas Dam, in 1959.

Check out these sites to read more about Troll dolls: Lady Glittersparkles' costume is black and pink plaid oversized shirt and matching bottoms. Wear an inflatable stomach costume to recreate her rounded belly. Then wear a white belt on top. Complete the look with white platform sandals and technicolor wig. 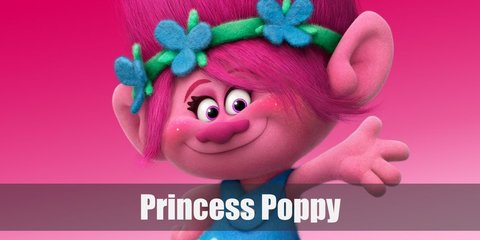 Princess Poppy costume is a blue dress with white poppy patterns on the hem. She also has pink skin and pink hair in an updo. Draculaura wears a black see-through net shirt topped with a pink vest with a small bow collar, a white mini skirt, black net stockings, and high black and pink boots.
Some of the links may be affiliated. When you buy through our links, we may earn small commision. Read Full Disclosure. Thanks for supporting us.