Sally Walden (Cat in the Hat) Costume for Cosplay & Halloween 2022 Sally Walter is such a cute character from The Cat in the Hat and your sister, daughter, niece (or even you!) can pull it off easily! Simply wear a purple top with collar and layer it with a green dress or pinafore. Then tie the blonde hair with pink ribbons into cute twin buns.

Sally is a character from Dr. Seuss’ The Cat in the Hat. The story follows a Cat that shows up in Sally and her brother’s house. The Cat then turns to show tricks to the kids while their mother was away. As the kids grew alarmed and the mother is about to come home, The Cat is able to produce a machine that cleans up its mess. The Cat then disappears just in time before the mother arrived. 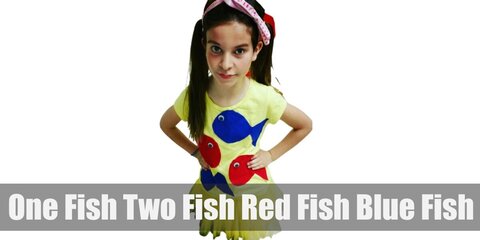 The One Fish, Two Fish, Red Fish, Blue Fish costume features a yellow set of clothing with fish cut outs on the shirt.