How to Make Gordon Freeman Costume Gordon Freeman is the main character of Half-Life, and is a theoretical physicist and research scientist that became a resistance leader when a global alien invasion occurred on Earth. Though Gordon is a mute character who does not speak any lines, his main story arc shows that he is someone who will do whatever it takes to protect his friends and the world.

Gordon Freeman is most known for his choice of weapons and futuristic armor. He wears a grey suit, dark grey armor, black gloves, and brings along his iconic crowbar.

Gordon Freeman is widely known to be a mute character as all action is viewed through his eyes. However, this is contradicted in an image of his acceptance letter to the Black Mesa Research Facility where it mentions a “recent telephone conversation” between him and someone at the facility.

Check out these sites to read more about Gordon Freeman and the other characters from Half-Life: Kratos' costume can be rocked with white and red body paint or make-up. He wears a brown arm harness, fingerless gloves, loin cloth, and boots. He also carries an axe. 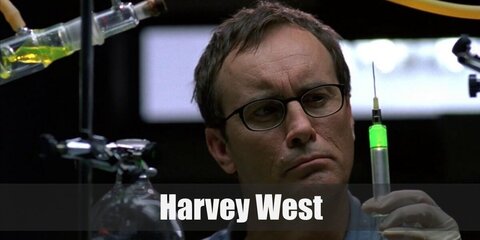 Herbert West's outfit has a bloody shirt, pants, and a doctor's bag. He also carries a syringe with green fluid.