How to Make Alexander Hamilton Costume 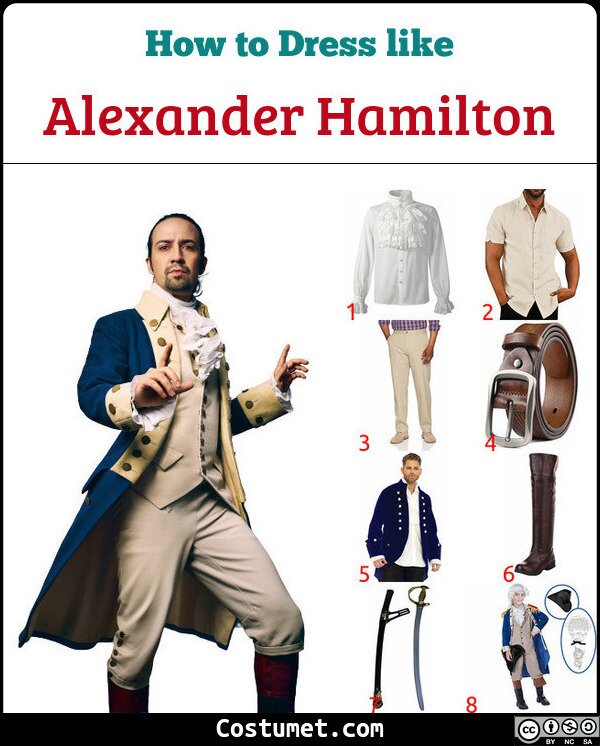 In the hit Broadway musical, Hamilton: An American Musical, the performers told the story of Alexander Hamilton through rap songs and a mix of jazz, hip hop, and ballet moves. One of Hamilton’s most prominent outfits in the show was his blue officer’s uniform.

Alexander Hamilton died due to a gunshot wound fired by Aaron Burr when they dueled in 1804. Incidentally, his eldest son also died in a duel in 1801 which took place in the same area as Hamilton’s. His wife was Eliza Hamilton.

Alexander Hamilton was first played by Lin-Manuel Miranda for the hit Broadway musical about the founding father. Miranda was also the script and music writer as well as lyricist for the show.

Check out these sites to read more about Alexander Hamilton and the hit Broadway production, Hamilton: An American Musical: King George's costume consists of red coat and shorts with high socks and black shoes. He also has red cape and a crown.

Samuel Adams’ costume is colonial attire (red for the founding father) and a mug of beer. When you hear the name ‘Samuel Adams’, you’re probably thinking one of two things: the founding father or the beer.
Some of the links may be affiliated. When you buy through our links, we may earn small commision. Read Full Disclosure. Thanks for supporting us.