Hela was introduced to the MCU in Thor: Ragnarok where audiences were surprised to learn that Thor and Loki had an older sister. Hela is the Asgardian Goddess of Death and was the chief executioner for her father, Odin. She was imprisoned for millennia until the death of Odin released her.

Much like Loki’s attire, Hela prefers darker colors like black and green. But unlike Loki’s outfit which screams royalty, Hela looks like an avenging angel in her black and green turtleneck, off-shoulder jumpsuit. She also wears a really cool looking headpiece. Here’s everything you need to look like Hela.

How to Make Hela Costume Hela was portrayed by actress, Cate Blanchett, who is one of the highest paid actresses of today.

Check out these sites to read more about Hela and the other characters from Marvel: 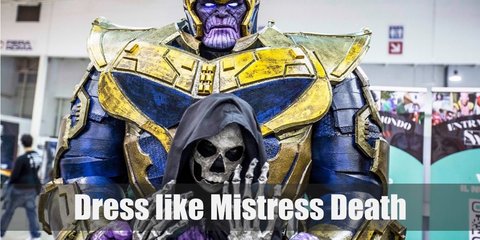 Mistress Death’s most popular costume is her all-black, gothic look. She wears a black leather long dress, a black hooded cape, and a skeletal face.

Hades’ costume is a dark grey shirt, black fabric, black sandals, a skull brooch, and a blue wig.
Some of the links may be affiliated. When you buy through our links, we may earn small commision. Read Full Disclosure. Thanks for supporting us.