How to Make Erron Black’s Costume from Mortal Kombat Erron’s costume will require lots of pieces for a DIY take. First off, get a brown armor and paint it red aross the middle to recreate the design of his armor. Then wear brown pants that you can style with a bullet belt, gun holster, and knee caps. Wear a pair of leather boots and your pair of arm guards, too. Then be sure to wear a mask and a matching cape. Top the costume off with a cowboy hat, too.

Erron Black is a character in the game franchise Mortal Kombat. He is born from Earthrealm and is an Outworld mercenary. He used to be a member of Black Dragon. Erron is described as an Outlander who serves the Outworld rulers, no matter who it is. He first appeared in the Mortal Kombat X comic series but made his game debut as playable character in Mortal Kombat X. 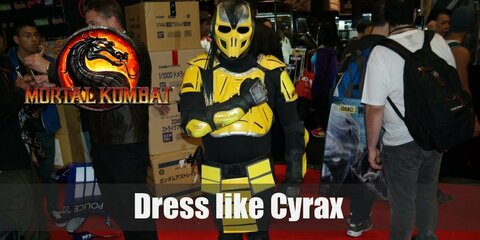 Cyrax may have started out on the bad side, but he’s reformed and decided to side with the light. Cyrax looks like a robotic version of Scorpion with his enhanced ninja armor. One major difference, though, is his full helmet. The ultimate villain of the game, Shao Kahn even rivals the strength and powers of Raiden, the God of Thunder. Shao Kahn looks like a fierce warrior with his red loincloth, spiked shoulder pads, spiked arm and leg guards, and skull mask.

Arthur Morgan's costume is a blue button-down shirt paired with black pants and boots. Then style it with suspenders and a black neckerchief, with props like a cowboy hat, gun holster, a fake pistol.