Akasha (Queen of the Damned) Costume for Cosplay & Halloween

How to Make Akasha’s Queen of the Damned Costume

Coming from a forgotten middle eastern kingdom, Akasha’s costume contains exotic and mysterious feelings. She wears a breastplate, a long black skirt with a silver belt, a big neck piece, a crown, arm bands and gauntlets with fabric attached to them, and fancy sandals. We also add long nails, vampire fangs, and long black wig to spice up the look. About Akasha from Queen of the Damned

Akasha is the main protagonist in a 2002 horror movie Queen of the Damned, starring a fallen singer Aaliyah. Akasha is an ancient vampire queen from the forgotten kingdom named Uruk. She’s known as the first vampire, the great mother.

Her beauty was incomparable and timeless, and remains as such though when she turns into stone. Her personality, however, is dark and cruel. Akasha is selfish and has no compassion for anybody. For many vampires, she’s a true monster. 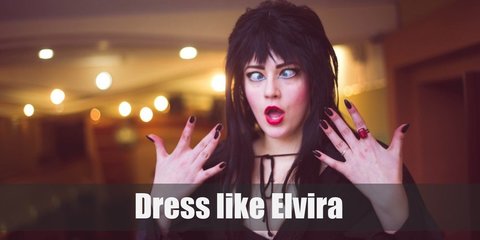 What a typical Elvira look needs is a very dramatic black evening gown, a knife and belt sheath, dark makeup, and a black mullet style wig. Lydia Deetz musical costume typical goth girl costume. Lydia likes her black dress, black lace gloves, black knee-high socks, and black shoes.
Some of the links may be affiliated. When you buy through our links, we may earn small commision. Read Full Disclosure. Thanks for supporting us.