Mulan is the strong-willed daughter of an elderly war veteran. When men were asked to go into battle, Mulan disguises herself to take the place of her father. She keeps her identity as a woman as secret so that she can fight for her family and her country.

Mulan’s outfits in the 1998 Disney animated films are all iconic. But one of her most popular ones is her final outfit consisting of a light blue shirt, a dark blue vest, a pink sash, a white skirt, and her dragon medallion.

The 2020 rendition of Mulan’s outfit is fast becoming iconic as well due to its warrior vibes. Here, Mulan is wearing a white tunic, white pants, a red long-sleeved tunic, and a belted armor.

Mulan is a tough and brave warrior-lady whose character is set in the days of old China. Because of this, her style is also very much traditional and classic Chinese. She has several outfits depending on her situation, such as when she is in the army, she wears armor and is dressed as a man.

Here is a tutorial to Mulan’s makeup, as though she is a tough warrior, she does have some very pretty and simple makeup going on for her.

Mulan is an old Chinese legend that was turned into many stories and movies over the years. Her story is one of great bravery and sacrifice, as her elderly father is called to serve in the Chinese army, she goes in his stead masquerading as a man.

Mulan was voiced by Ming-Na Wen in the 1998 Disney film, Mulan. Ming-Na Wen is also known for her roles in Agents of S.H.I.E.L.D., Street Fighter, Final Fantasy: The Spirits Within, and The Mandalorian.

Mulan was portrayed by Liu Yifei in the 2020 live-action Disney film, Mulan. Liu Yifei is also known for her roles in The Forbidden Kingdom, Tong que tai, Di san zhong ai qing, and Hanson and the Beast.

Check out these sites to read more about Mulan and the other characters from Disney’s Mulan: 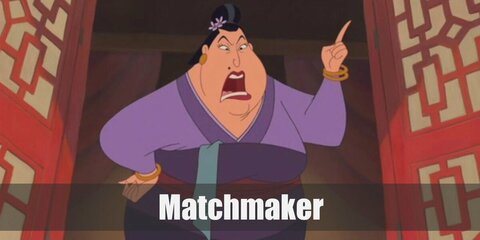 You can DIY The Matchmaker's clothes with a purple kimono cardigan wrapped by a layer of purple and red cloth around the torso. Top the skirt part off with navy blue cloth.