How to make Cousin Eddie Costume from National Lampoon’s Vacation 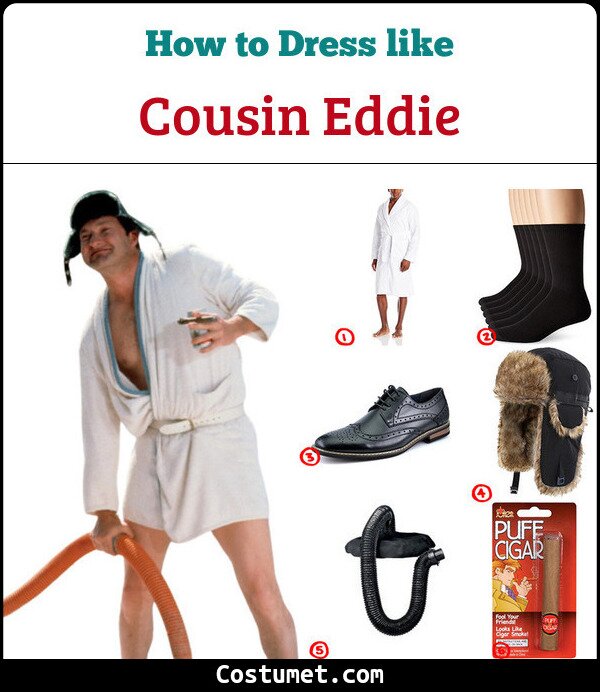 How to Make Catherine Costume You either love him or you hate him. Cousin Eddie might have a really big presence when he’s in the room but that doesn’t necessarily equate to being a good thing. Cousin Eddie’s just too different from normal suburban life that you’ll find yourself cringing from all his awkward moments to hiding behind something from the downright embarrassing ones.

Cousin Eddie’s most memorable outfit was when he was cleaning outside with nothing but his fluffy bathrobe on. Well, he pairs it with a comfy winter hunting hat and a can of beer so he’s fine. Here’s everything you need to look like Cousin Eddie.

Catherine & Cousin Eddie are husband and wife. He’s a bit scatterbrained and you can say she’s been long-suffering. At Christmas time, they were living in an RV since Cousin Eddie lost his job. A series of shenanigans ensue and it’s a good thing Catherine’s super patient.

Catherine & Cousin Eddie are night and day when it comes to what they wear. Cousin Eddie is most known for his white robe, black socks, and Eskimo hat while Catherine is better known for her striped winter scarf, brown khaki coat, and green beanie.

Cousin Eddie is played by actor Randy Quaid. You might know him as the goofy, country living cousin but Quaid is actually an Academy Award nominee. Quaid is also known for his roles in Independence Day, Brokeback Mountain, and Kingpin.

Catherine was portrayed by Miriam Flynn. Flynn is also known for her roles in Babe, Vegas Vacation, and The Land Before Time V: The Mysterious Island.

Check out these sites to read more about Cousin Eddie and the other characters from the National Lampoon’s Vacation: