How to Make Ash’s Costume from Sing Ash is a porcupine who loves to sing! Her cosplay can be kicked off with a cool wig that resembles her spikes styled with a headband of mouse ears and a mouse nose to symbolize her porcupine features. She also has a black striped shirt with a red plaid skirt and denim jeans. Complete her rocker costume with a pair of sneakers and a toy guitar.

Ash is a character from the animated film Sing. She is an anthropomorphic crested porcupine voiced by Scarlett Johansson. Ash is one of the main characters in the film. Ash is described as a prickly teenage porcupine with a punk rock attitude. She auditions with her boyfriend who is a selfish and unsupportive person who cheats on her with Becky. Her boyfriend has been holding her back. In the rehearsal stage, she usually clashes with Buster because Buster wants her to be a pop star while Ash wants to do rock. Johnny’s costume is a green thunder shirt, a black motorcycle jacket, denim jeans, and navy sneakers. A gorilla costume mask or eye mask and gorilla gloves will complete the look. Nana Noodleman outfit is a long purple dress with a black collar. She wears her hair in a headpiece with a feather. 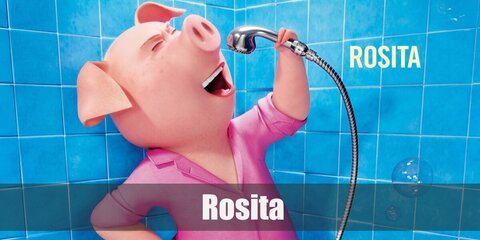