How to make Chewbacca costume Chewbacca actually looks like every Wookiee, which is one of the species from the planet Kashyyyk. This costume should be pretty straightforward. There aren’t many details. It is all about long-hair fur. Additionally, there are few details like ammo belt and custom made blaster gun. Despite their appearance, Wookiees are actually pretty intelligent. Also, they are taller than most of the people, and that is one of the things you should consider when choosing to cosplay Chewbacca.

This guy may look tough, but he is actually pretty gentle and full of emotions. Although he doesn’t speak human language, Han Solo and Chewbacca perfectly understand each other. Also, he is pretty capable. He knows to fly a spaceship and to use many weapons.

There are two ways to make Chewbacca costume. The first one is buying a complete costume kit. On the other side, you can go for a jumpsuit and combine it with the mask and rest of accessories. In both cases, it shouldn’t be complicated.

There are many interesting things about one of the most popular characters from the Star Wars franchise. His unique speech was actually created by sound designer Ben Burtt, who mixed individual recordings of various animals like walruses, lions, camels, bears, rabbits, tigers.

Check out these sites to read more about Chewbacca and the rest of the Star Wars crew: Jake Sully and Neytiri appear in an all-blue skin which can be recreated with a bottle of blue body paint or full body bodysuit. Decorate the blue skin with a darker shade of blue for the tiger stripes. They also have brown loin cloths and around the arms and legs. Wear long wigs accordingly. 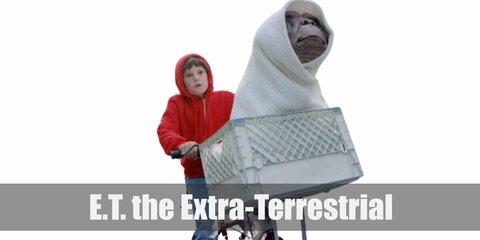 E.T.’s costume is a red hoodie, denim pants, and his bike has a white crate where ET is hidden under a white blanket. The most important thing in cosplaying Admiral Ackbar is to find its recognizable mask, characterized by large fish-like eyes. Other pieces of the costume shouldn’t be so difficult to find. This character wears a classic Star Wars military uniform.