How to make Han Solo Costume With the recent craze over the upcoming Han Solo movie, it is only fair we show you how to dress up like the most wanted smuggler in the galaxy. So buckle-up, because we’re going to make a light-speed jump through Han Solo’s iconic outfit.

Back in Star Wars Episode IV: A New Hope, the first time we see the infamous pilot of the Millennium Falcon, he’s wearing a black, four-pocket vest over a yellowish, half-collar, v-neck shirt with no buttons. Black leather high boots and a pair of navy blue tuxedo trousers with decorating red stripes on the sides held by a three-hole belt.

Remember, his most important accessory is his utility belt with blaster holster. It’s an absolute must and cannot be missing in your Han Solo costume.

No need to scavenge through the galaxy. All the costumes of your favorite Star Wars characters are right here. 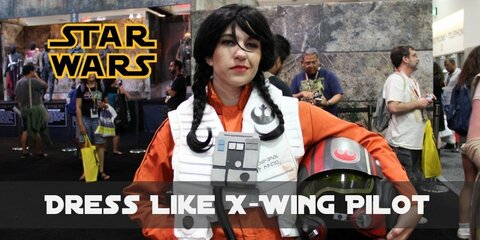 X-Wing pilots attire consists of an orange jumpsuit, a white vest with a chest box, black leather boots and matching gloves, a silver-gray harness and a helmet.