Kuzco is the reigning emperor of the Kuzconian Empire. But that didn’t automatically make him a good leader.

In fact, he started out as a spoiled, arrogant, self-centered person and because of that he was turned into a llama. It’s a good thing that he befriended Pacha and his family so that he could learn the error of his ways.

Despite being spoiled and melodramatic, Kuzco prefers quite simple clothes. He wears a red tunic with a red sash, a gold semi-circular crown, a gold necklace, and huge, round, teal earrings. Here’s everything you need to look like Kuzco!

How to Make Emperor Kuzco Costume Kuzco was portrayed by David Spade. Spade is also known for his role as Joe Dirt.

Check out these sites to read more about Emperor Kuzco and the other characters from The Emperor’s New Groove: 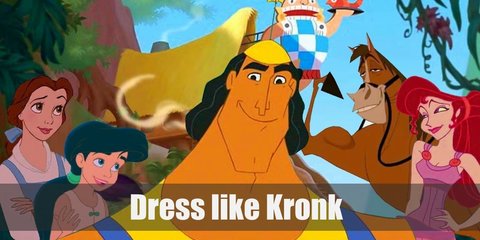 Kronk costume is a light blue sleeveless top with yellow details, a dark purple skirt, and a light purple sash around his waist. He also has yellow arm and leg bands as well as a distinct yellow cap.
Some of the links may be affiliated. When you buy through our links, we may earn small commision. Read Full Disclosure. Thanks for supporting us.