How to Make Goldmember’s Costume from Austin Powers

Here are golden pieces you can wear to get that Goldmember print on! Goldmember’s costume screams richness and privilege! Keep it shiny by kicking off the costume with a gold jacket. Then wear a pair of golden pants and shoes. Style the outfit with a balding wig. You can also wear gold chains as necklace! Mr. Grey is wearing a full body grey suit and pants, a white shirt, a tie, a watch, a black belt, and a pair of leather formal shoes. Cousin Eddie’s most memorable outfit was when he was cleaning outside with nothing but his fluffy bathrobe on. Catherine costume is khaki trench coat, brown pants, scarf & beanie. 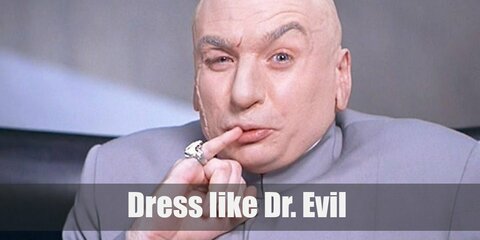 Dr. Evil costume is a gray long-sleeved shirt with a matching pair of pants, a ring on his pinky finger, and pair of white formal shoes.

Captain Spaulding wears a plaid shirt, cargo pants, and working boots. Otis wears black bell jeans without a shirt, a belt, and black working boots. Baby wears a brown spaghetti dress and cowboy boots.
Some of the links may be affiliated. When you buy through our links, we may earn small commision. Read Full Disclosure. Thanks for supporting us.