Let’s take a look at the optimistic and confident Mr. Peanutbutter. This TV hot-shot is always on the look out for his next big hit and he does so in a comfortable sporty outfit that shows off his athletic physique.

He is usually seen wearing a slim, gray, v-neck t-shirt with black hemming around the collar and the arm openings.

His pants seem to be aquamarine sweatpants with white piping carefully tugged in his yellow and orange basketball sneakers.

Last, but not least, the most famous Golden Retriever on TV is known to wear black aviator sunglasses on his forehead and a pair of wristbands. A green rubber wristband and a brown leather bracelet with a rustic clasp.

This Golden Retriever never shies away from opportunities or trends, so it’s not surprising to catch a glimpse at some of his previous outfits over the years; but if you want a spot-on costume of Mr. Peanutbutter, stick to his present-day outfit. It’s easier to identify and more popular amongst fans.

How to make Mr. Peanutbutter Costume Mr. Peanutbutter (Paul F. Tompkins) lucks out on almost every aspect of his life. From the moment he stepped into the airplane to Los Angeles in the early 90’s, Peanutbutter was already destined to be a star with peculiar talents. For example, he co-piloted the very airplane that took him to California out of sheer self-confidence the same way he popped in a pilot episode of a Horsin’ Around knock off, which is how he became a household name in Hollywood.

Unfortunately, it is that same venturous positive nature what’s lead him into poor investment decisions or failed TV shows. This could also explain his failed marriages. First, to Katrina Peanutbutter, then to Jessica Biel and, more recently, to Diane Nguyen; BoJack’s ghostwriter.

One thing is for sure. It doesn’t matter how many times this Labrador gets knock down to his tail, he will always bounce back on his paws and chase any opportunity he can. 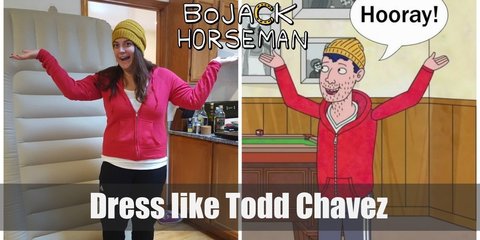 Just got out of bed? Perfect! You're half way done. Now all you need to do to look like Todd Chavez is to zip-up that red hoodie, slip on those gray sweatpants and put on your blue flip-flops. Don't forget the yellow beanie hat!