How to Make Henry Danger Costume 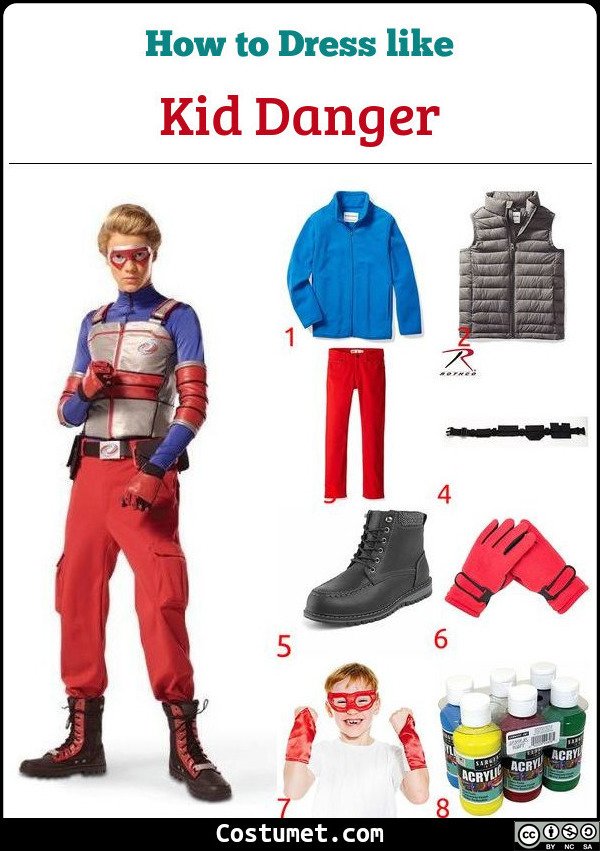 Like many kids his age, Henry wants to become a superhero; and all his wildest dreams come true when he’s sworn in as Kid Danger, the loyal sidekick of Captain Man.

While being charming, quick-witted, and brave are great superhero traits to have, Henry still needs a lot of training.

He wears a blue zip up jacket with a silver vest over it, red pants, black boots, and a red eye mask. Here’s everything you need to look like Henry Danger. Captain Man is one of the lead characters in the show and his costume is rightfully eye-catching. To cop the look, be sure to wear a blue long-sleeved top and matching pants. Then style the top with strips of red cloth on the chest area and around the belly. Top it off with a belt or fanny pack. Wear matching black boots and mask to nail the look!

Captain Man is a character from the television series Henry Danger. Premise circles around Henry Hart who becomes Kid Danger, aka the sidekick of superhero Captain Man. Their secret lair is situated in a shop named ‘Junk ‘n’ Stuff’. He tells Henry that he will not be a hero for long and that his help is highly needed. He expects Kid Danger to take his place in the future.

In the series, Captain Man is a superhero who teams up with Kid Danger and other characters to fight various villains, including Dr. Minyak and The Gentleman Bandit. Captain Man’s real identity is never revealed. What is known about him is that he has a baby daughter named Penny Danger alongside his wife, an unnamed woman. He also has a pink pet chihuahua named Pinky who accompanies him on his adventures.

Henry Hart aka. Kid Danger was portrayed by Jace Norman.

Henry Danger is a popular children’s television series, where Henry is the protagonist and the town’s local safety patrol officer. However, in reality, he’s just a 12-year-old boy who works part-time as a lifeguard and has an overprotective sister named Charlotte. His best friend is Reggie, who has been by his side for years.

Check out these sites to read more about Henry Hart and the other characters from Henry Danger: