Big Bad Wolf has been portrayed in many versions, but all represent him as a frightening and manipulative creature.

In this article, we’ll make him more human and give him some clothes. He has a wolf head, hairy arms and claws, and hairy wolf feet. He wears a long sleeved plaid shirt with brown pants with suspenders. He also wear a straw hat to cover his terrifying face. Big Bad Wolf is one of the famous villain characters, next to witches and other monsters, who’s featured in many bed time stories such as in Little Red Ridding Hood, he wants to eat a little girl who’s on her way to visit her grandmother, so he moves ahead of a little girl, devours her sick grandmother, and disguises as an old lady waiting for the little girl to come.

Considering his action and plans in various stories, Big Bad Wolf comes across as a cunning and violent character who will do whatever it takes to get what he wants. However, his cunning nature doesn’t save him from the Huntsman’s axe in the end of the story. 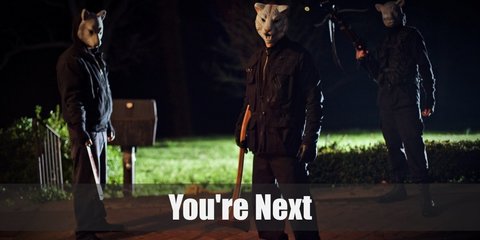 The Animals in You’re Next costume, more or less, wear the same outfit. Just make sure you’re dressed all in black and put on either a fox, lamb, or white tiger mask to cover your face. Grey wolf costume is composed of a grey mini dress with fringes on the hem. It has a wolf hood with fur, as well as fuzzy leg and arm warmers. Complete the look with grey strap heels. Sly Cooper costume is a blue top with a pair of shirts, a yellow neckerchief, and raccoon tails. This look can also be nailed with a a toy cane, a blu hat, and blue boots.
Some of the links may be affiliated. When you buy through our links, we may earn small commision. Read Full Disclosure. Thanks for supporting us.