How to Make Peely’s Costume from Fortnite Peely’s eye-catching costume features an all-yellow ensemble. You can pair your banana suit with a full body suit. If you want separate pieces, you may also get a sweater and a pair of pants to match with the banana peel. Then complete the look with your gloves and boots.

To make it an Agent Peely outfit, wear a blacksuit with a bowtie, a leg holster and black sunglasses.

Peely is a character skin from the game Fortnite. It is considered an Epic Outfit in Battle Royale which can be received as a reward from Tier 47 of Battle Pass Season 8. In the game, it comes with a bunch of bananas rather than a single character as seen in Season 8. In one of the Fortnite short, Banana Rift, it can be seen that Peely was born when Jonesy and a banana went into the rift. The breadwinner costume features sweatbands, medals, and your choice of bread. Green Pea in A Pod Costume

Wear a green shirt and add foam balls as the green pea. Then make a DIY cocoon with a yard of cloth. 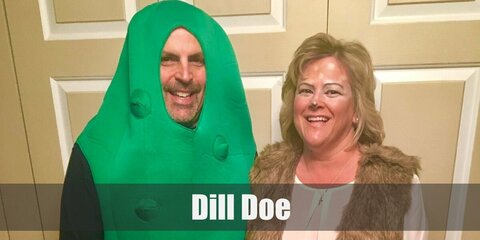 The pun take on Dunkin Donuts costume can be recreated with a giant donut costume or a floaty. Take it to the next level with a pun and wear basketball jerseys. Style a guacamole or avocado costume with angel wings and a halo.