How to Make Owen Grady Costume from Jurassic World The character of Own Grady has a ranger look on him. He wears a brown leather vest jacket on a blue rolled-up sleeve shirt with dark pants and brown leather boots match the vest. Therefore, his style seems less of a costume and more of a practical hunting or hiking outfit. Chris Pratt looks so cool in it, and you can too!

Although in the present world we have not yet created a park or an island full of dinosaurs, we can at least replicate the style of a dinosaur park ranger for fun. But who knows, one day you might have need it to fight with some genetic mixed-up dinosaurs in your town. Better be ready!

How to Make Claire Dearing Costume 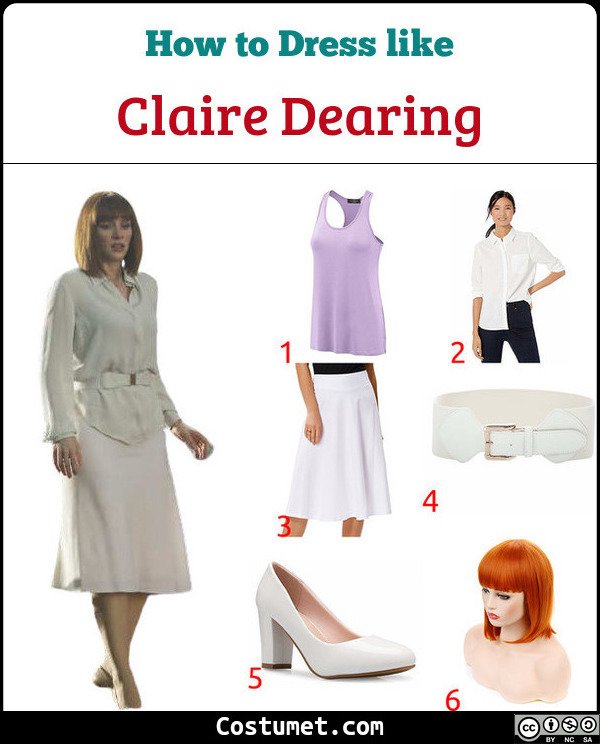 Claire Dearing is the Operations Manager of the park, Jurassic World. She is a textbook workaholic but you can see her change of priorities as the movie progresses. Claire is a dedicated and resourceful person and that’s why she tried to help as much as she can.

Claire’s initial outfit in the movie shows her love for the pristine and her need to look her best. She has on a lilac tank top, a white button-down shirt, and a white midi skirt; the perfect outfit for work.

Claire Dearing was portrayed by Bryce Dallas Howard. She is also known for her roles in The Help, Gold, and an episode in the hit TV series Black Mirror.

However, the film’s director Colin Trevorrow says that it’s neither a reboot nor sequel but more like all of them put together. Whatever it is, we can agree on how enjoyable the film is. In this version, Chris Pratt is a lead actor who played the character of Owen Grady, an InGen employee whose duty is to train and study a group of velociraptors, and because of the job, Grady grew a special bound between him and these beasts. This relationship actually did Owen a favor because the raptors took his side during the Indominus rex outbreak.

Check out these sites to read more about Claire and the other characters from Jurassic World: Robin Hood costume is made up of a quilted jacket, black pants, and boots. Maid Marian’s costume is a pink, long-sleeved top under a lilac dress, pink sandals, a veil, and a turquoise brooch.
Some of the links may be affiliated. When you buy through our links, we may earn small commision. Read Full Disclosure. Thanks for supporting us.