Here are some pieces you and your friend can get to dress like Laverne and Shirley: Laverne’s fell in love with a monogrammed clothing she saw in a store and then proceeded to add her own “L” to her outfits. This made it easy to identify her in the show. To dress like her, cop her casual-corporate style with a quarter-sleeved top and a colored skirt. Don’t forget the L on her chest and use a ribbon to form the letter.

Meanwile, Shirley’s outfit can be recreated with a white collared shirt under a blue sweater. Pair it with a white skirt.

Both of these looks can be completed with black shoes.

Laverne & Shirley are the protagonists in the sitcom also named Lavern & Shirley. The story follows the two ladies who are good friends and roommates. They are bottle-openers in the Shotz Brewery in Wisconsin. as the show progressed, they move to California where they got jobs at a department store. The show is multi-awarded and even became the most-watched American television program by season three. Piper Chapman costume is a grey shirt under the khaki scrub and has blonde hair. 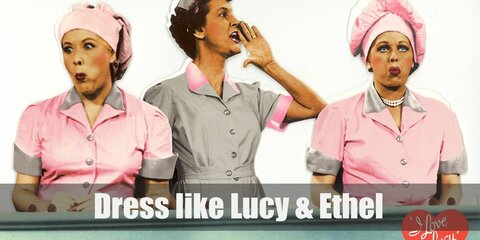