Max Rockatansky’s look has a lot of rustic touch to it, which makes sense since he has to go through the apocalyptic wasteland. He wears a brown T-shirt under a torn black leather jacket, a pair of brown pants, tactical boots, bandaged gloves and a black scarf to cover his face. He’s also equipped with a combat knife and a gun. Are you interested now? Checkout our list down below!

Max Rockatansky who’s famously known by the name Mad Max, played by Tom Hardy, is the protagonist character in the 2015 sequel of the franchise with the same name. The film sets the futuristic wasteland where everything is covered in hot sand, a female worker tries to rebel against a tyrannical ruler named Immortan Joe by rescuing his wives from him. Then her path comes across Max. Both of them must work together to survive the army of war boys.

In this movie, Max is portrayed as a man who’s haunted by the tragedy of his family. While he’s suffered by the memory, he needs to make sure he will survive in the cut throat environment. Unfortunately, one day he is being kidnapped by a group of war boys, soldiers who works for Immortan Joe. William Wallace wears a brown T-shirt, a kilt and a matching sash, a leather armor, and gladiator shoes. 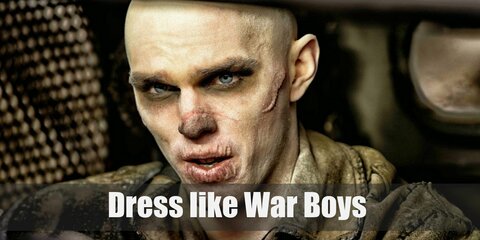 War Boys often wear only a pair of dark cargo pants with a big belt and motorcycle boots. However, some of them may have other accessories such as gloves or goggles on.
Some of the links may be affiliated. When you buy through our links, we may earn small commision. Read Full Disclosure. Thanks for supporting us.