The Tethered (Us) Costume for Cosplay & Halloween

How to Make The Tethered’s Costume from Us The Tethered characters in the film called Us are doppelgängers who are out to kill their doubles. The viewers can set them apart from the normal characters because of their outfits. To dress like them, wear a red coverall and carry your choice of weapon (which can be a pair of big scissors).

The Tethered are the doppelgängers in the film Us. They are seen wearing red as they sought out their doubles.They are called the Tethered because they are living in the shadows of their “normal” doubles. In order to escape being tethered, they are seeking to kill the counterparts. 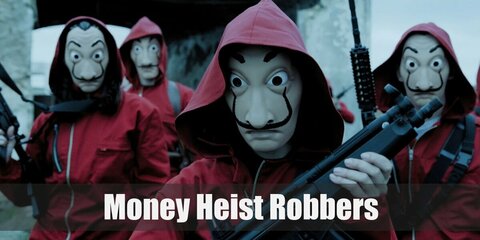 Candy Girl wears a pink dress with tutu skirt, black leather thigh high boots, a devil mask with 'Kiss Me' written on it in red, and pink underpants.

Dead Presidents gang costume is to wear a black sweater, denim pants, a zip-up jacket, a black beanie, and face paint.
Some of the links may be affiliated. When you buy through our links, we may earn small commision. Read Full Disclosure. Thanks for supporting us.