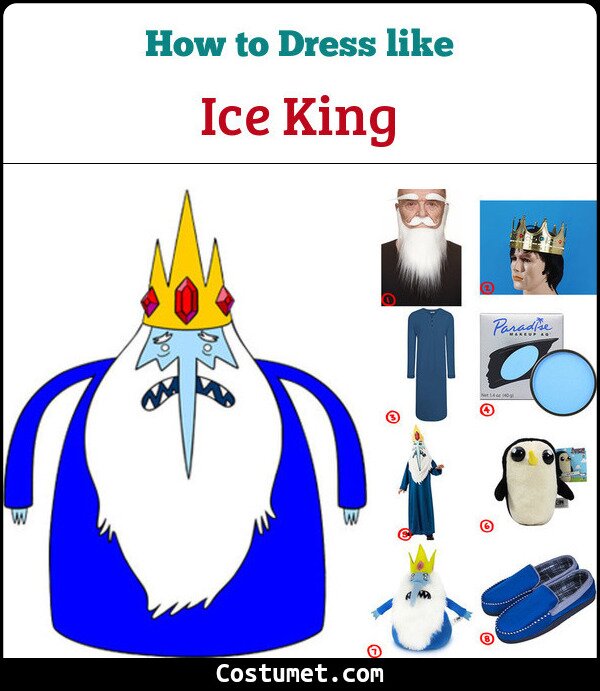 Ice King has long white beard, a gold royal crown, and a long blue robe. We can say that his signature color is blue regard to his power pact and ice nature. If you’re interested in recreating the ice king’s look, follow our list down below!

Ice King, played by an actor Tom Kenny, is one of main characters in a Cartoon Network’s popular fantasy and adventure animated TV series Adventure Time, the show about a teenage human named Finn, and his magical dog best friend Jake, exploring the Land of Ooo and defeating the bad guys. Ice King is a ruler of the ice kingdom who is presented as Finn’s and Jake’s foil because he often kidnaps a princess and force her tom marry him.

With his crown, Ice King has the ability to unleash ice and winter power which means he will have no power without it. Unfortunately, at the same time, his crown is the reason why he loses his sanity. Therefore Ice King’s often misunderstood because of his mental problem. Although Ice King is presented as an antagonist in the early of the show, he has never been a serious threat according to Princess Bubblegum, just a little bit annoying. Dr. Krieger wears a long white lab coat. Under this lab gown is a yellow button-down shirt with a brown necktie. He wears light brown pants with a belt. He has black shoes, too. To complete the look, wear a brown wig with beard. Yosemite Sam looks like a very hairy cowboy. He wears a red shirt, yellow bandana, denim pants, and black boots. He also has an oversized cowboy hat. Plus, who could forget his overly-hairy eyebrowsand long ginger beard?
Some of the links may be affiliated. When you buy through our links, we may earn small commision. Read Full Disclosure. Thanks for supporting us.