It’s hard not to question whether Kodak Black is famous for his rap songs or infamous because of his many charges. Kodak Black is a good rapper, that’s true. In fact, he has quite a number of fans to prove that. But he is also quite notorious when it comes to drugs, possessing weapons, and general misconduct (which hasn’t buttered him up to a lot of other people).

Regardless of whether or not you’re a Kodak Black fan, no one can say he doesn’t have interesting fashion choices. Kodak Black is known for his gold teeth, unconventional afro hair ‘do, and his many, many tattoos. Here’s everything you need to look like Kodak Black.

How to Make Kodak Black Costume 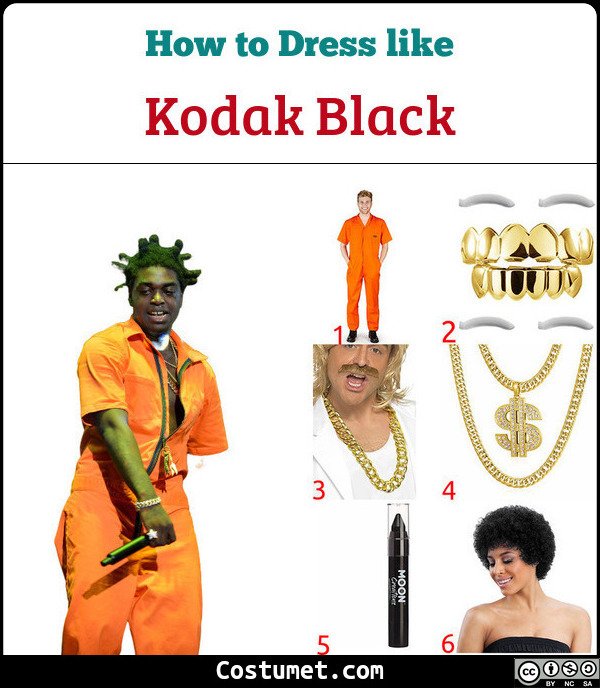 Kodak Black’s real name is Dieuson Octave. He gave himself the nickname ‘Black’ from the age of six, and has been using variations of it throughout the years. ‘Kodak Black’ was first used when he joined Instagram with the explanation that ‘kodak’ meant ‘pictures.’

Check out these sites to read more about Kodak Black:

Eazy-E costume is black baseball cap with matching sunglasses, jacket and fingerless gloves. Throw in an oversized t-shirt, relaxed pants for comfort and some sneakers for style.

Drake costume is a plain black sweater topped with a leather jacket with fur hood, tan pants, a belt, a fashionable pair of sneakers, and a gold necklace.

Jimi Hendrix costume is a colorful loose top, dark colored pants with belt. He also dons a equally colorful headband and metallic or gold-toned accessories.
Some of the links may be affiliated. When you buy through our links, we may earn small commision. Read Full Disclosure. Thanks for supporting us.