How to Make Pinocchio Costume Pinocchio is a puppet made by a woodcarver named Geppetto whose greatest wish was to have a son. So a fairy granted his wish by bringing to life Pinocchio. Pinocchio must prove himself with the help of Jiminy Cricket to become a real boy. He is also known for his nose that elongates when he lies.

Pinocchio wears a classic boy’s outfit from medieval Italy. He wears a yellow shirt with a white collar and blue neck tie tucked in a pair of red shorts and worn with a pair of leather shoes.

Pinocchio was voiced by Dickie Jones in the 1940 Disney animated film of the same name. Jones is also known for his roles in Avengers: Age of Ultron, The Call of the Savage, Little Men, and The Howards of Virginia.

Check out these sites to learn more about Pinocchio and other characters from Pinocchio: 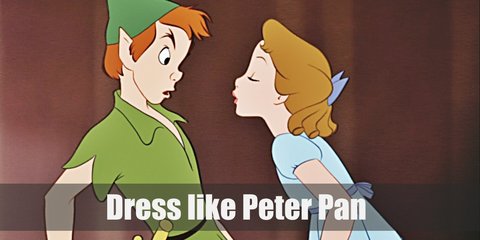 Peter Pan costume is a green tunic, a pair of green tights with a dagger around his waist, brown elf shoes, and a green hat atop his reddish brown hair.