How to Make a Lord Voldemort Costume Lord Voldemort, or He Who Shall Not Be Named, is a very evil wizard in the Harry Potter series. He has been so corrupted and has lived for so long that his skin has begun to gray and decay.

His face and hands are all very decayed, head is bald, and his nose is almost completely disappeared. He wears wizarding robes that are all black, and very large. His robes flow are him as he flies or walks for a very dramatic effect.

His accessories include a white wand that is very personal to him and helps him use and control his powerful magic, as well as a Death Eater tattoo since he is their leader.

Lastly, he is bare-foot, but boots that are versatile and can easily blend in with the rest of the costume are included for convenience.

Lord Voldemort is the most evil wizard, also known as the Dark Lord, in the Harry Potter franchise.

Voldemort was once a normal wizard named Tom Riddle, but his hunger for power and his extreme belief in blood purity turned him into something that is not quite human, though still unbelievably powerful.

In the movies, the grown Lord Voldemort is played by Ralph Fiennes. 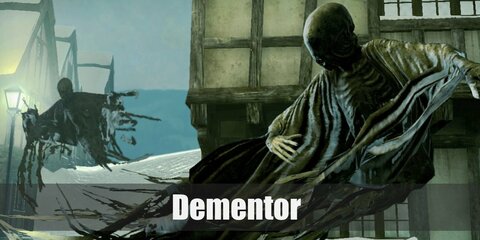 A dementor costume is a long, billowing, tattered black hooded robe, and you can see the outlines of their ribs. That’s all.