D-d-dementor! Dementor! You might think that Harry Potter’s worst fear would be the evil maniac who killed his parents and repeatedly tried to murder him. But no, it’s actually a dementor.

Dementors affect Harry more because he’s led a difficult life than most people, and it mind-numbingly terrifies him to be in one. But you know The Boy Who Lived.

With a little bit of practice and a lot of help from his Expecto Patronum skills, dementors are no longer a problem.

A dementor doesn’t need to look horrendous to be terrifying. In fact, nobody knows what they actually look like under their hood.

They wear a long, billowing, tattered black hooded robe, and you can see the outlines of their ribs. That’s all. Here’s everything you need to look like a Dementor.

How to make a Dementor Costume Dementors are Dark creatures who guard the wizard prison Azkaban. A dementor’s supernatural power is to suck out all the happiness in its vicinity.

They are also very dangerous as a ‘Dementor’s Kiss’ means sucking out your very soul. Your body will not die, but you’ll be a vegetable until your heart stops beating.

Check out these sites to read more about Dementors and the other characters from Harry Potter: 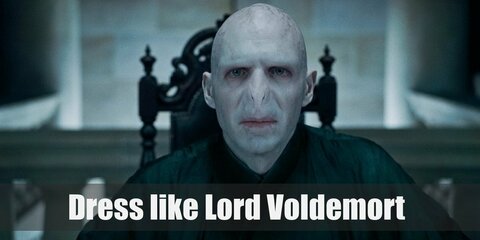 Lord Voldemort has been so corrupted and has lived for so long that his skin has begun to gray and decay. The Headless Horseman looks sinister yet regal in his mercenary uniform. He wears a typical colonial outfit consisting of a jacket, jabot, and cuffs. He is also armed with his axe. Death Eaters wear long, black hooded robes, and a fancy Death mask. They also have the Dark Mark on their forearm and their wand.
Some of the links may be affiliated. When you buy through our links, we may earn small commision. Read Full Disclosure. Thanks for supporting us.