Ever since Minecraft boomed, Steve has become a popular fictional character who has been featured in many other platforms. He could even be seen in other games; but wherever fame takes him, he would always be Minecraft’s number one.

Steve looks like a common person, except that he’s pixelated and easily recognized today. He wears a light blue shirt, denim pants, and black shoes. Here’s everything you need to look like Steve.

How to Make Steve Costume Steve is the name of the playable character in Minecraft. He is the main protagonist. His female equivalent is Alex.

He is also in Borderlands 2 and is an unlockable character in Retro City Rampage and in Hybrid. Steve has also bee featured in YouTube videos created by Element Animation.

Check out these sites to read more about Steve and the other characters from Minecraft: 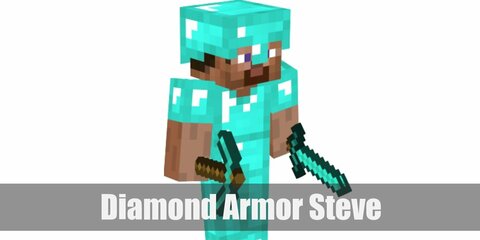 Diamond Armor Steve’s costume is blue-diamond armor from head to toe with a diamond sword and pick. Diamond Steve is the type of Steve in the final part of the game. A typical zombie from Minecraft is has a green block head and a green body. It wears a light blue shirt and blue pants.
Some of the links may be affiliated. When you buy through our links, we may earn small commision. Read Full Disclosure. Thanks for supporting us.