How to Make Little Nicky’s Costume Nicky is one of the three sons who are being chosen to rule Hell, Nicky is considered the kind one. His outfit reflects this attitude as he is seen on the poster with a very comfy outfit. To get his look, be sure to get a blue down jacket with red pants too. Then get a pair of orange gloves and brown shoes. Complete the look with clip-on bangs as well as your own flask.

Little Nicky is a fantasy comedy film starring Adam Sandler. It follows the story of three siblings who are in the running to be appointed as the ruler of hell. Nicky is considered the gentlest one. He carries the flash to stop the other two from causing mayhem. Anyone who drinks from the flask will be trapped inside. 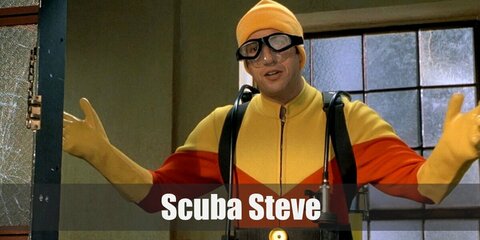 Rex’s costume is a personalized polo shirt with his name embroidered on it, an American flag-designed pair of pants, yellow sports glasses, and a red bandana with white stars.

Seth’s costume is a light grey undershirt, a blue button-down shirt with white details, grey plaid pants, and navy sneakers. Seth just wants to be a bit more popular in high school.
Some of the links may be affiliated. When you buy through our links, we may earn small commision. Read Full Disclosure. Thanks for supporting us.