How to Make A-Train’s Costume

Everyone has their signature color for their costumes and that of A-train is blue. He wears a blue sport shirt with short sleeves, blue sport pants, blue wind-proof goggles, a white silicon belt, blue arm guards, shoulder pads, and blue high boots. You can also add fake blood on your clothes and carry a red shoulder bag as props.

Looks fun for your costume party? Grab all the items down below to make this happens. A-Train, a speeder, is one of the Sevens, the (in)famous superheroes group from the Amazon Prime’s dark hero TV series The Boys.The show follows a group of ordinary men stand up against the group of famous superheroes whose public personas are all glorious and sunshine, but there are grim truth and cruel behavior behind the curtain.

A-Train, who was created after DC’s The Flash, is one of the big reasons why the anti-hero group called The Boys was formed. Namely, he was hitting Hughie Campbell’s girlfriend while he was high on a superhero’s drug Compound V. But the what happened was twisted and shifted by the hero’s company to make it look like an accident, provoking Hughie’s anger. 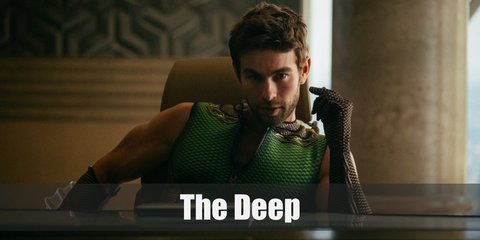