How to make Fionna the Human costume from Adventure Time Because they’re the same person, Fionna’s style is mostly a female version of Finn’s, and the signature two-ears hat remains, but is adapted to be more feminine like other items. Fionna wears a blue T-shirt with denim mini skirt and thigh high white socks with a pair of black shoes, and most importantly, she has a feminized two-ears white hat on with her blond hair shown off. Fionna also carries the same lime green backpack that Finn has. For her weapon, Fionna has a pink sword. The list below will guide you to Fionna’s style.

About Fionna the Human

Fionna is an in-universe fictional character and the gender-swapped version of Finn, people also know her as Fionna the Human, played by a voice actress Madeleine Martin, in the very popular fantasy-adventure animated TV series Adventure Time from Cartoon Network channel, which tells the story of a teenage human named Finn as he explores the Land of Ooo and overcomes the evil forces.

Accompanied by a magical cat named Cake, who’s a gender-swapped version of Jake, Fionna explores and defeating evils in the realm of the Land of Ooo, created by the Ice King in his fan-fiction, where everyone is being alternated from their identity in real world, whether it’s gender or species. Fionna’s personality is not too different from Finn at all, except the fact that she’s a calm person, because she’s kind, fearless, and adventurous. Most importantly, she loves fixing the wrong to right and helps the innocents from evil acts. 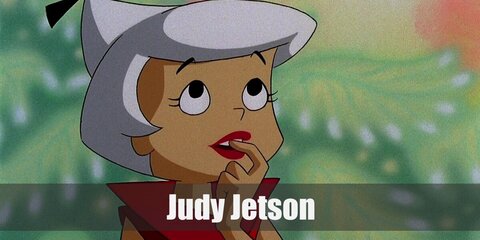 Judy Jetson outfit is an all-pink ensemble with a cropped top, skirt, and tights. She wears flat shoes and has her white hair in a ponytail