How to make Marceline the Vampire Queen Costume Despite her old age, Marceline has quite simple and modern outfits. Also her style speaks of rock music.

Also, Marceline has a very long black hair with a little bit of blue highlighted that reflects her rock style. Check the list below on how to rock her look!

About Marceline the Vampire Queen

Marceline Abadeer or well known as Marceline the Vampire Queen, played by a voice actress Olivia Olson, is one of main characters, considered the third important one after Finn and Jake, in a Cartoon Network popular fantasy-adventure animated TV series Adventure Time, which tells the story of a teenage human named Finn, with his best friend Jake, who together explore the Land of Ooo and battle the evil forces.

Marceline, a daughter of Hunson Abadeer the demon who rules the Nightosphere, is 1003-year-old vampire therefore she’s very wise which makes her a scary rival to Finn and Jake when they first meet.

Nevertheless, soon after, she becomes the boys’ closest friend and joins them in a number of fights. Her old age also shape her personality as well, having to see so many things for a thousand years makes her fearless and reckless dare devil, also a traveler who loves exotic things. Mona the vampire costume is a white button-down shirt, a red cardigan, a black mini skirt, a pair of white crew socks, brown Oxfords, and a purple cape. Her hair is also done in multiple braids. 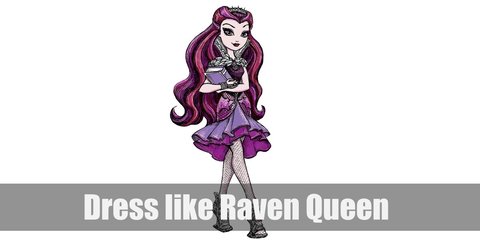 Fionna costume is a blue T-shirt with denim mini skirt and thigh high white socks with a pair of black shoes, and most importantly, she has a feminized two-ears white hat on with her blond hair shown off. Ice Queen costume is a blue long sleeved princess gown with a pair of blue shoes, a gold necklace, and a tiara.
Some of the links may be affiliated. When you buy through our links, we may earn small commision. Read Full Disclosure. Thanks for supporting us.