How to make Squidward Costume Squidward is Spongebob’s arrogant and cranky neighbor who is narcissistic and sarcastic when talked to. This bald, turquoise octopus rarely smiles and thinks that most people are beneath him. Squidward is indeed one of the few intelligent characters in the series. Unfortunately for him and his big dreams, he has bad artistic taste which might be the reason for his surly disposition.

Squidward only wears one article of clothing in the series and that’s a light brown collared top. But since you’re not going bottomless, here’s everything you need to look like Squidward.

Even though he’s snarky and over-all annoying, Squidward is still one of the most beloved characters in the Spongebob Squarepants series. When the story begins, we meet Squidward already bald; and most assume that he has been bald ever since.

What not a lot of people know is that Squidward had a long mop of glorious blonde hair during his younger days. This was revealed in the "The Original Fry Cook’ episode. 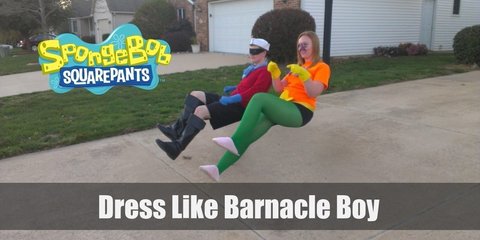 Patrick keeps it simple when it comes to what he wears, donning on only a pair of bright green floral shorts. Here is everything you need to look like Patrick Star Man Ray’s costume is a full red bodysuit, blue swim boxers, blue boots, blue gloves, a yellow belt buckle, and a blue ray mask.
Some of the links may be affiliated. When you buy through our links, we may earn small commision. Read Full Disclosure. Thanks for supporting us.