Anne Bonny’s typical outfit is very piratical as well as colonial-inspired. She wears a white blouse with pleats around the chest and a dark green lace-up corset that cover her from her waist to her shoulders. On her bottom half she is dressed in a dark green skirt with a slit or part cut from the side, knee high gray socks or stockings, and flat shoes with a buckle.

For accessories she wears layered leather cord necklaces, a pink crown of roses around the back of her head, and a short sword with a scabbard belt around her waist. She also has a red sash tied around her waist which adds a pop of color to the overall look. Here’s what you need to put together your own version of an Anne Bonny costume.

This costume is a fun option for any Assassin’s Creed fan. It’s an interesting outfit and with a little effort can make a phenomenal cosplay costume.

Anne Bonny is an outstanding character part of the Assassin’s Creed video game series. She makes an appearance in Assassin’s Creed IV: Black Flag and plays one of the main supporting characters. She is a very tough and fiery Irish woman, though she was taken to North Caroline when she was young. She worked as a barmaid is Port Nassau, which led to her meeting and dealings with many pirates.

After meeting Mary Read, in disguise as a male pirate called James Kidd, she and Mary put together a crew and go off sailing. During her pirating years, Anne acquired a great deal of treasure and had many successful robberies, but was eventually caught. 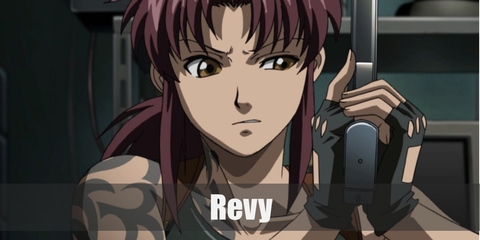 Revy's costume include a black tank top, denim shorts, boots, and toy guns. She has burgundy hair, too.