Frank the Bunny Costume from Donnie Darko for Cosplay & Halloween

The iconic horror movie, Donnie Darko is considered a cult classic among generations and people of all ages. The movie has a number of eccentric characters with odd fashion taste, but Frank the Bunny, portrayed by James Duval, can be considered as one of the coolest and most oddly horrifying costumes in cult horror ever seen.

The costume of the Frank the Bunny is as expected, a rabbit costume, but the face and mask part of the costume is quite possibly the most gruesome and weird thing you’ve ever seen.

This is a great costume for any fan of classic horror movies, and also the costume itself is very easy and simply to acquire. There is no complicated DIY involved which makes it great for those who want an interesting and low maintenance costume.

How to Make a Frank the Bunny Costume

The Frank the Bunny costume is easily found pre-made and can be ordered without any fuss. It’s a simple costume, but quite scary in its own way. In essence, the costume is a large grey rabbit, but the mask part is what truly makes this costume interesting.

The mask is the face of a skeleton, and has gory looking teeth twisted into a terrifying smile. The rabbit ears and face are all supposed to look like bone, while the eyes are extremely large white orbs that stare into anyone’s face and look ready to devour them.

About Frank the Bunny

Frank the Bunny is the antagonist in the cult classic film, Donnie Darko. He is one of the main characters in the movie as his role is to try to help and guide the protagonist, which he chooses to do, but ends up ruining it horribly instead due to messing with timelines and universes and ends up frightening the protagonist making him think he is going crazy instead. Donnie Darko dresses up in a simple costume of a skeleton full body suit with a gray hoodie over the top. This costume is very simple and fits his moody-don’t care-troubled teenager attitude. 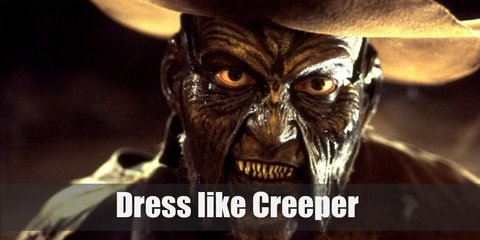 The Flying Monkey costume is composed of furry or fleece top with monster arms and fuzzy legs in grey. Top the fleece with a cut out of a blue shirt formed into a tight vest with red felt as decoration. Complete the costume with wings, a sailor hat, and a blue monkey mask.
Some of the links may be affiliated. When you buy through our links, we may earn small commision. Read Full Disclosure. Thanks for supporting us.