Like Captain Malcolm Reynolds, Zoë Alleyne Washburne’s clothes’ brown color tone reflects their past military group, the Browncoat. What she wears looks quite simple and plain like many other characters in the show: a plain T-shirt with a brown leather vest over and regular tan pants with black boots. Her typical choice of weapon is shot guns.

How to make Zoe Washburne Costume 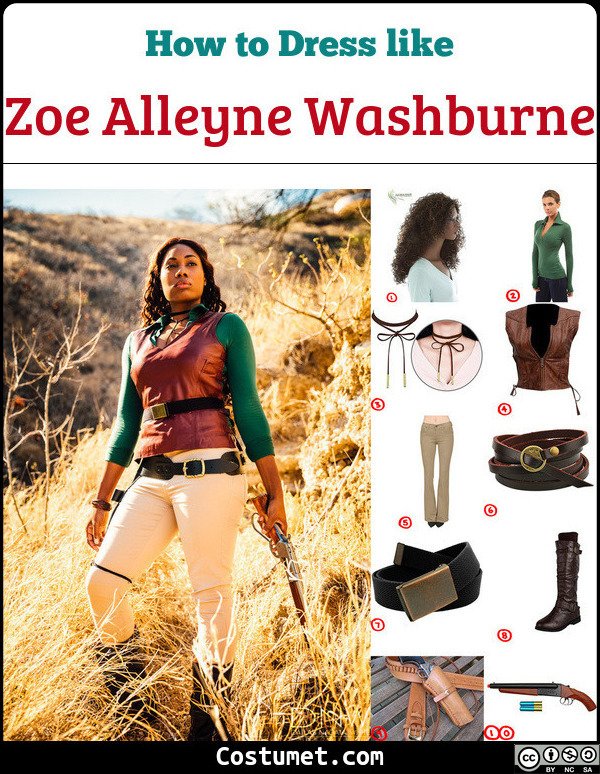 She has fought alongside Captain Malcolm Reynolds in the Unification War and in many following battles and she’s one of the coolest characters in the show. Zoë Alleyne Washburne, played by Gina Torres, is one of the main characters in a 2002 sci-fi T.V. series Firefly.

Zoë was first introduced to the audience as a Browncoat who serves in the Unification War under Malcolm Reynolds. After losing the war and escaping from the Battle of Serenity Valley, she decides to follow Reynolds onto the Serenity and continue to work under his command there. The Serenity is where Zoë meets pilot Hoban “Wash” Washburne who later becomes her husband, although at first she seemed not to like him at all. Zoë is a loyal soldier to her commander and to her side, The Independent, her loyalty once drove her to join a terrorist group called “the Dust Devils,” an organization formed to against The Alliance. Missandei’s costume is a light blue, sleeveless dress, brown sandals, brown curly hair, and a choker. Missandei is one of Daenerys’ most trusted companions. Inara Serra costume has a certain style where she’s always chooses to wear gowns and the color she often picks is red
Some of the links may be affiliated. When you buy through our links, we may earn small commision. Read Full Disclosure. Thanks for supporting us.