How to make Robin Scherbatsky costume Robin has a very tomboyish style sense, and sometimes her outfits can be somewhat confusing. Usual she is dressed very simply in mostly neutral colors, but other times you might see her wearing a more feminine item of clothing, like lacey flats, red skinny jeans, or a form fitting vest top. Most of her clothing is definitely very late 90s early 2000s style; nonetheless, most items could probably be easily found in your own wardrobe.

A typical Robin outfit would be something like a pair skinny jeans, a striped shirt in a neutral color, a sporty blazer, a pair of lacey flats, a small shoulder handbag, and a simple yet feminine watch. Here’s how to put your costume together.

Robin usually has minimal makeup and keeps her hair straight and brushed down, so that’s all you have to for cosmetics. A Robin Sherbatsky costume is a simple costume that looks good on anyone. Fans of the “How I Met Your Mother” show will all tell you she is a very unique and fun character to portray.

Robin Scherbatsky is an influential character part of the five-member friend group starring in the hit TV series, “How I Met You Mother”. Played by the lesser known but still well-loved actress, Cobie Smulders, Robin is a journalist with very interesting hobbies, some of which include drinking Scotch and smoking cigars.

Unlike any other character in the “How I Met Your Mother” series,
Robin is loved by fans for her unusual and snarky personality. Robin is first introduced to the rest of the group after a particularity disastrous date with Ted; the others warm up to her immediately and the rest is history. Betty Rubble hardly ever wears anything else than her blue tube dress and her blue hair bow. If it's the cartoon version you're aiming for, a tube dress will do. For the movie version you may be looking at a double-layer dress. Do not miss the bow though. Lily Aldrin (How I Met Your Mother) Costume

Lily Aldrin’s typical outfit might consist of a pattered flouncy blouse, blue jeans, a matching cardigan, calf length boots, and accessories such as earrings and bracelets 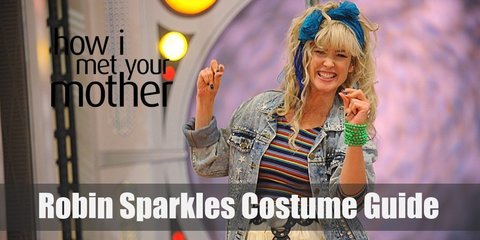 A Robin Sparkles costume consists of a lot of frills, bows, and big sparkles