PNK is the short name for a sorority in Monsters University, with its full name being Phyton Nu Kappa. The 6 sisters of PNK, covered in pink from head to toe, all with 3 eyes and the same hairstyle, act and look practically the same, except for their different skin colors. They look sweet and are smart, but also cold-hearted and merciless.

A PNK sister practically has the same get-up as her other sisters. She wears a PNK sweatshirt, a pink layered tutu skirt, pink furry leg warmers, and pink sneakers.

All PNK sisters were voiced by Beth Behrs. Behrs is also known for her roles in 2 Broke Girls, Hello, My Name is Doris, and The Neighborhood.

Check out these sites to learn more about PNK and other characters from Monsters University: 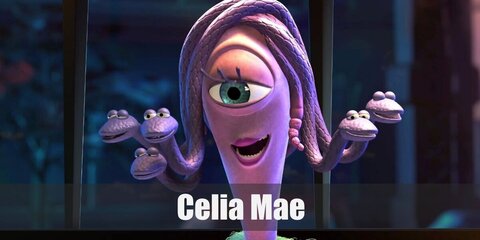 Celia’s costume is snakes on her head, and a green short sleeveless dress with scale print design and a bluish green puffy collar.